Zimmerman Juror: "George Zimmerman Is A Man Whose Heart Was In The Right Place"

One of the six anonymous jurors who acquitted George Zimmerman of all charges related to the fatal shooting of Trayvon Martin spoke out for the first time in an exclusive interview with Anderson Cooper last night. Among other things, the juror, known as B37, argued that George Zimmerman "is a man whose heart was in the right place, but just got displaced by the vandalism in the neighborhoods, and wanting to catch these people so badly that he went above and beyond what he really should have done."

According to B37, Martin was responsible for his own death just as much as Zimmerman. "It’s a tragedy this happened," she explained, "but it happened. And I think both were responsible for the situation they had gotten themselves into." And as far as she's concerned, race played no role in the shooting: "I think if there was another person, Spanish, white, Asian, if they came in the same situation where Trayvon was, I think George would have reacted the exact same way."

B37 also said that the jury was divided in half when deliberations began, with three voting for a guilty verdict. But she was with the not-guilty side that eventually won out. "There was a couple of them in there that wanted to find him guilty of something," B37 told Cooper, but in the end, Zimmerman was acquitted of all charges.

If any of this makes your blood boil, you can take comfort in the fact that B37's book deal has fallen through. Uproxx has an interesting account of how the deal fell apart thanks to one outraged Twitter user who launched a campaign to pressure B37's agent to drop the juror. This actually worked, and B37 subsequently decided to abandon the project (for now at least). "Now that I am returned to my family and to society in general, I have realized that the best direction for me to go is away from writing any sort of book and return instead to my life as it was before I was called to sit on this jury," she said in a statement. 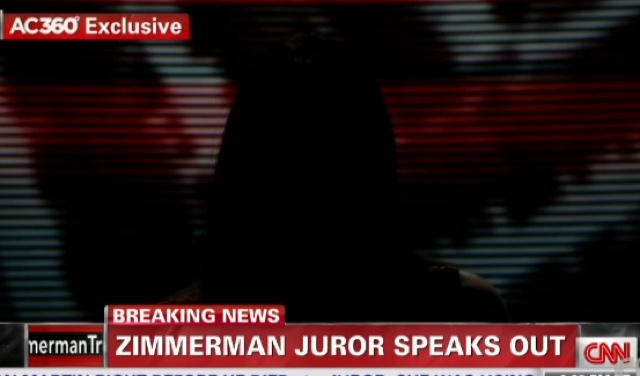