"Yupster" Says He Was Defending Girlfriend In Liquor Store Assault, Denies Being Yupster

The man accused of "wilding out" on an elderly man in a Clinton Hill liquor store last week says he was merely protecting his girlfriend from sexual assault. "Look, the guy was touching my girlfriend, I did what I had to do," Matt DeSio told us. "This guy was like a bum and he was on her, and she was screaming for help. I was outside and came in and threw him off her." 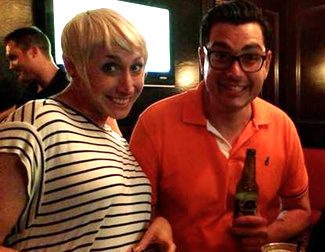 DeSio and his girlfriend. Please don't use trite stereotypes when describing them. (Facebook)

DeSio also took issue with our characterization of him in the initial story. "It's not fair the way it's characterized in the media. If I didn't look the way I did, it would not be that way," DeSio said. "You know you guys are not funny, your snarky shit is not funny."

On Friday, the NYPD released images of a man who allegedly kicked and punched an unidentified 61-year-old man inside Lucky Liquor store on Myrtle Avenue. DeSio says he called the NYPD "immediately" after our article was published, and that he intends to turn himself in to police tomorrow.

An NYPD spokesman added, "Allegedly he was supposed to work it out, and he's missed a few times to come in." DeSio's attorney, Emilio Marino, has not responded to our request for comment.

"First of all, I want you to know that I own a small business," DeSio told us. "Secondly, I'm from Staten Island, I'm ex-military, I'm an Iraq War veteran, so the way that you characterized me was totally off-base, alright? And that's not fair."

DeSio added, "I served my country as an infantryman, and you make me look like a fucking asshole."