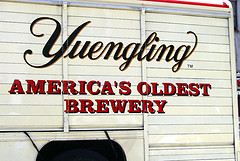 A delivery truck driven by a guy on a cell phone was turning and almost hit me and another guy. Me and the other guy put our hands up like "what are you doing," but we didn't say or mouth anything to the driver. The driver (jacked) got out, followed me down the street (not the other guy), called me a "faggot" several times, punched me really hard in the jaw, knocked my stuff onto the sidewalk, and went back to his truck. Then when I looked at his license plate to memorize the number he came back, called me a "faggot" again, and asked me if I was going to "be a bitch" and "tell" on him. I got the plate number, though, and the name of his company from the side of the truck.

Following the incident he filed a police report and called the company to file a complaint. Today, five days later, he still has a sore neck -- along with other physical and emotional distress. Meanwhile, Yuengling has told him that the driver was not an employee of their company, but rather of a distribution company they use, and was unresponsive beyond that when asked about who to contact about the matter. Walsh is now calling out the beer company, asking if Yuengling condones such hate crimes.

#assault
#beer
#brad walsh
#hate crime
#truck
#Yuengling
Do you know the scoop? Comment below or Send us a Tip