'You're Definitely Not Supposed To Be Here': How I Walked Off The Street And Into The DNC Without Credentials

I am sitting in the press pen at Wells Fargo Center, watching Bill de Blasio excoriate Donald Trump a couple hundred feet below me. In a few hours, President Barack Obama will stride to the podium amid deafening roars. But for now, dozens of bored reporters are listening to their headphones or staring blankly into space. One appears to be dead asleep. It's true that hundreds of reporters were credentialed for the DNC—but I was not one of them.

“I should try to sneak into Wells Fargo,” I’d joked earlier to my editor, a guy who knows a thing or two about sneaking into high-security events. I’d headed to Philadelphia on Monday to cover the “outside,” which is to say, any instances of mass dissent, police brutality, inflatable joints and any other bedlam that occurred beyond the perimeter of the tightly sealed (or so I thought) arena.

I dropped the plan shortly thereafter, though, after multiple assurances from fellow journalists and other credentialed staffers who insisted it couldn’t be done. The credentialing process, I’d been told, was complicated, strict and ironclad. Applications had to be submitted by April 1st. A letter from the publication’s editor had to be sent to the press gallery, and applicants had to clear a Secret Service background check. There would be, after all, a handful of the most powerful human beings in the free world here. “Not going to happen,” crowed the naysayers, which is to say, everybody.

I didn’t realistically think it could be done, either. How can a sweaty, under-dressed reporter with a bike maneuver around four fences and dozens of layers of security into one of the most heavily fortified events in the nation?

Earlier in the afternoon I’d ridden down to the arena, thinking I’d hang out in the tent city in FDR park, across Broad Street. I spoke to Zakk Blews, a 27-year-old pedicab driver who came from Chicago hoping to give rides to high-tipping delegates. His plan was foiled, however, by his inability to get anywhere near the area. Buses and black SUVs were responsible for whisking delegates and other party officials in and out of the stadium’s thick security buffer, an amniotic sac of vast, hot parking lots and checkpoints manned by a melange of armed protectors ranging from Philly PD to Secret Service to Homeland Security.

“No one’s getting anywhere near that place,” he chuckled, taking a long drag off his cigarette.

I rode my bike up and down along the perimeter fence near the park, checking out the hardware. No fewer than four layers of fence separated me from the arena, to say nothing of whatever measures were in effect at the actual entrance. My story, I figured, would be about the excessive protection padding the delegates and the lengths they went to avoid the filthy hoi polloi clamoring on the outside. But maybe, just for fun, I’d see how close I could get, armed with nothing more than an NYPD press pass and a smile. I’d snap a photo of my location: “This is how close you can get to Wells Fargo without credentials.” Perhaps I’d make a tweet. 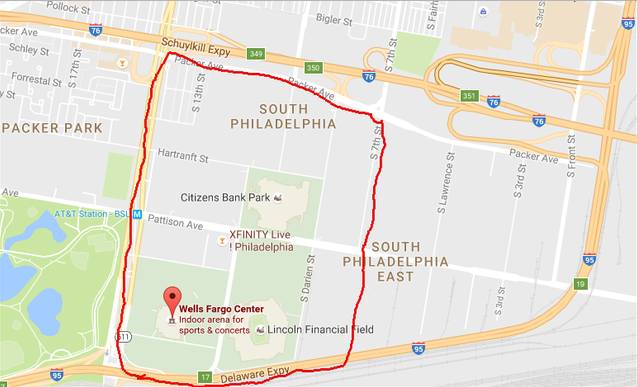 I paused at one of the gaps in the fence, manned by a group of sweaty bike cops crowded around a tray of slushies. I asked where, if I wanted to spy a superdelegate, I had the best shot of getting the closest.

“No one told us anything—we’re just stuck outside on the fence all day,” one said. I asked if anyone had tried to climb over. “Just a few knuckleheads,” he replied. I asked what would happen if I tried.

“Please don’t,” he said, his voice filled with genuine pleading.

By around 3:30 p.m., I decided it was time to depart the Wells Fargo complex. I was hungry, and the blazing sun felt like it had crawled down from outer space to drape itself across my shoulders specifically. As I pedaled down Packer Avenue, I paused to talk to one last cop, who was sitting in his patrol car blasting the A/C. He said Secret Service was responsible for ushering delegates in and out, but that he didn’t have any details. He shrugged. “The media tent is on South 7th,” he said. Maybe they’ll have more information.”

Earlier in the day, I’d overheard another reporter lament to a colleague that someone had picked up his press credentials. It seemed there was no system in place for dealing with that problem, which struck me as odd. I hung a right at 7th, formulating my plan. “I’m press, see, and look, some thief picked up my pass.” The Wells Fargo fortress loomed to the west.

A Philly PD officer in wraparound sunglasses leaped into my path. “YOU NEED TO DISMOUNT THE BIKE,” he bellowed, waving his hands. I pointed to my NYPD press pass, which dangled around my neck.

I rode to the entry where another officer was stationed. “I’m looking for the press tent,” I explained. “Over there, through the parking lot,” he said, pointing across what looked like miles of boiling pavement.

A handsome Secret Service officer with sparkling white teeth explained that this entry was only for cars, and we watched together as a German Shepherd sniffed the trunk of an unmarked black SUV.

I asked if the dog searched everyone who came through, even the really important people.

“Absolutely,” he said. I asked if they’d found anything exciting on anyone important. “No comment,” he said, smiling. I told him I'd take that as a yes.

The pedestrian entry, he said, was across yet another vast parking lot, a slog that would have taken 15 minutes on foot but would be in moments on a bicycle. On my way, a Homeland Security officer waved me through a barrier meant to keep out traffic.

“I only helped you because you’re from New York,” he said, pointing to my press pass. 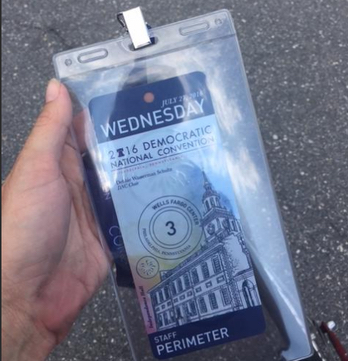 If there was a press tent, I couldn’t find it. “Bike was a good idea,” said a man in a beige sweater said as he walked by. I couldn’t tell with whom he was affiliated, but I agreed. “Say, do you know if there’s a media tent?," I asked. "I’m having a credentialing issue." This was true. I didn’t have one, which was an issue.

“One sec,” he said, and vanished behind a trailer. I figured he was gone, and I scrolled listlessly through Twitter. A minute or two later, he reappeared. “Here you go.” He thrust a lanyard into my hand. “Staff, Perimeter,” read the credential hanging from its end. I looked at him in disbelief. He winked.

“Perimeter,” of course, meant the perimeter of the arena, so you can imagine my surprise when I approached the doors and was waved in.

Once inside, I was waved past another round of security to the mezzanine. I peered past a clump of guards into the stadium. I could see the podium. I definitely was not supposed to be in here.

“You’re definitely not supposed to be in here,” one guard said.

Here are two things I learned to be true: 1. Gothamist has at least one fan in Philly, who happened to be doing media relations for the event. 2. People tend to feel sorry for you when you tell them your credentials got swiped.

“You mean you just left it somewhere?” a kindly woman in glasses asked. I nodded. “You should know better,“ she sighed, “you’re from New York.” We walked together to the press gallery, where she explained my presence to one of the guards. I hung my head and tried to look contrite.

The guard looked at me.

“If you do anything, anything, to cause a disturbance, you’re out,” she said. I nodded. “If you get caught, you were never here,” she said, searching my face. I nodded.

You saw the whole thing on TV. Uncle Joe Biden commanded the room with his soft, forceful voice. Leon Panetta elicited boos. Most people took the opportunity during Lenny Kravitz's performance to use the bathroom. President Barack Obama made me cry a little. As I departed the arena six hours after I’d been allowed in, my bike, thank god, was precisely where I had left it.

As I shot through one of the many security gates toward 10th Street, I saw the same Homeland Security officer who’d helped me out because I was “from New York.”

“Hey, I saw you earlier," I shouted, hoping he’d say something that would really help tie this story together.

He smiled politely. He had no idea who I was.

When I started my day I really did NOT think it would end with this. #demsinphilly