Your Guide To Which Universal Rent Control Measures Will Survive Albany

With seven weeks left before New York State’s rent-regulation laws expire, a package of bills is pending in the state Legislature to both close longtime loopholes that have enabled landlords to hike rents and expand legal protections to millions more renters.

With Democrats now holding a majority in the state Senate, hopes are high that this will be the year not only to stanch the loss of rent-stabilized apartments, but to establish “universal rent control” that would extend tenant protections to renters in non-regulated units and upstate and on eastern Long Island. But it's increasingly apparent that some reforms are going to be more easily achievable than others.

“Without question, we are going to get significant reforms,” says Senator Zellnor Myrie (D-Brooklyn), one of the six insurgents who unseated Republican-allied Democrats last year while running on a strongly pro-tenant platform. But their proponents, he adds, “will have to double their efforts to get something that’s truly transformational.”

Assembly Speaker Carl Heastie has already endorsed eight of the nine bills in the package proposed by the Housing Justice for All coalition of tenant advocacy groups, including eliminating renovation bonuses for landlords, disallowing rent surcharges and decontrol for vacant apartments, and preventing rent hikes for existing tenants paying preferential rents. The one omission: Senator Julia Salazar's "good cause" eviction bill, which would effectively extend rent regulations to non-regulated apartments by prohibiting evictions for rent increases of more than 1.5 times the local rate of inflation.

“The Assembly Majority has always been a strong supporter of tenants and tenant rights, and this is a new issue that we will be further exploring in our upcoming hearings,” Heastie’s office said of the good-cause bill in an email.

That, however, does not include either the bills for good-cause eviction or to let local governments upstate and in Suffolk County regulate rents. It also implies that the governor would rather see capital improvement increases made temporary—with rents reverting to lower levels once renovations are paid off—instead of abolished.

The bills in Housing Justice for All’s "universal rent control" package include:

Repealing vacancy decontrol: Sponsored by Senate Majority Leader Andrea Stewart-Cousins (D-Westchester) and Assemblymember Linda Rosenthal (D-Manhattan), S2591/A1198 would repeal the 1997 vacancy-decontrol law that allows landlords to deregulate vacant rent-stabilized apartments if the rent is more than about $2,775 a month. Combined with rent increases allowed for renovations and weak state enforcement against illegal overcharges, this has led to the deregulation of hundreds of thousands of older apartments. The current bill would reregulate most of those.

Preventing preferential rent hikes: Sponsored by Assembly Housing Committee Chair Steven Cymbrowitz (D-Brooklyn) and Senator Liz Krueger (D-Manhattan), S2845A/A4349 would make “preferential rent” discounts—rents charged at below the legally allowed maximum for each apartment—last as long as the tenant stays there, instead of expiring when the lease comes up for renewal. This would protect more than 250,000 households from facing sudden increases when their leases expire.

Extending time for overcharge complaints: Sponsored by Senator Myrie and Assemblymember Jeffrey Dinowitz (D-Bronx), S4169/A5251, would extend the four-year statute of limitations for complaints about illegal rent overcharges to six years. It would also let the state Division of Housing and Community Renewal, which enforces rent regulations, look further back into an apartment’s rent history when necessary.

Limiting rent hikes for rent-controlled tenants: Assemblymember Rosenthal’s A167/S299A, sponsored in the Senate by Brian A. Benjamin (D-Manhattan), would eliminate the “Maximum Base Rent” system that covers the city's remaining 22,000 or so rent-controlled apartments. That system currently allows rents to rise by up to 7.5 percent a year for their largely elderly tenants; the bill would set rent increases similar to those for rent-stabilized apartments.

Richardson said April 9th that increases for individual apartment improvements, which are usually done when a unit is vacant, “invite landlord fraud” and “are the key factor that is gentrifying” her Crown Heights district. Rosenthal says she sees the repeal of vacancy decontrol and MCIs as “righting a historical wrong,” restoring balance to a system where “tenants pay MCIs forever, and DHCR doesn’t even check the applications to see if they’re valid.”

Expanding rent regulations to the rest of the state: Sponsored by Senator Neil Breslin (D-Albany) and Assemblymember Kevin Cahill (D-Kingston), S5040/A7046 would repeal the geographic limits in the state’s rent-stabilization law, the Emergency Tenant Protection Act of 1974. This would let local governments outside New York City and its suburbs in Nassau, Westchester, and Rockland counties enact their own rent-stabilization laws.

Limiting "unconscionable" rent hikes in all buildings of four units or more: Sponsored by Senator Julia Salazar (D-Brooklyn) and Assemblymember Pamela Hunter (D-Syracuse), S2892/A5030 would prohibit eviction without a “good cause”—such as not paying rent or creating a nuisance—except in owner-occupied buildings of less than four units and a few other special circumstances. This would expand tenant protections not just statewide, but to buildings of less than six apartments, which are not covered by rent stabilization.

To prevent landlords from pushing tenants out simply by raising the rent, it would prohibit eviction for not paying an “unconscionable” rent increase—defined as more than 50 percent above the local rate of inflation, or about 3.5 percent. Owners who want to oust tenants would have to prove that such an increase was justified.

“We’re looking to expand the pool and take back some of the ones we’ve lost,” says Assemblymember Harvey Epstein (D-Manhattan), a former tenant representative on the city Rent Guidelines Board. But he says good-cause eviction is a “complex” issue, and the Assembly may adopt a bill tailored more narrowly to target owners of multiple properties. 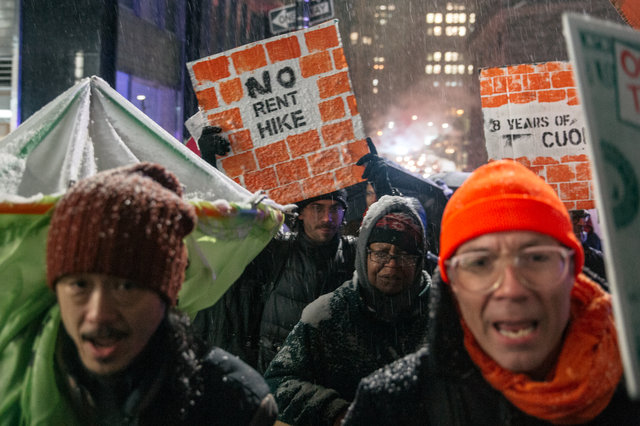 Senate majority leader Andrea Stewart-Cousins has yet to indicate which bills she will move forward, but will do so after the Senate returns to Albany April 29th, Senate Democratic spokesperson Mike Murphy tells Gothamist. “The Senate understands that for too long the scales have been tilted against tenants and we need significant reforms to strengthen protections for renters,” he says. “We intend to advance a comprehensive legislative agenda shortly that will provide the strongest rent laws in our state’s history.”

The rent-stabilization laws must be renewed by June 15th to remain in effect. Pro-tenant legislators say they hope it doesn’t go down to the last minute. “I would hate for us to be up against the wall, because that’s when shenanigans happen,” says Rosenthal.

The scenario tenant advocates want to avoid is one like 1997, when, with the Assembly and Senate at odds, a deal was reached behind closed doors by the traditional “three men in a room”: then-Governor George Pataki, Senate Majority Leader Joseph Bruno, and Assembly Speaker Sheldon Silver. With the laws on the verge of expiring, Silver conceded on vacancy decontrol, the 20 percent vacancy bonus, and the statute of limitations on illegal increases.

“I expect Andrew Cuomo to try to water everything down to help his cronies in the real-estate lobby,” says TenantsPAC treasurer Michael McKee, a longtime tenant activist and political fundraiser.

The real-estate lobby has been running ads against the MCI repeal and good-cause eviction bills, arguing that they discourage landlords from investing in their buildings. (The Real Estate Board of New York trade group did not respond to a request for comment from Gothamist.)

Much can happen in the legislative process, but one issue will be whether the bills will be passed as individual measures or incorporated into a “one big ugly” omnibus bill. The political advantage of an omnibus bill would be that it would prevent Cuomo from vetoing, for example, good-cause eviction or MCI repeal without jeopardizing the renewal of rent stabilization.

“Whatever strategy will get the bills passed,” says Myrie. “We need to fight for the whole pie.”

“Having been on the losing side for decades,” says Rosenthal, “I think it looks very hopeful.”

“This is the moment,” says Epstein. “If we don’t do it right, we may lose it forever.”

The Assembly Housing Committee will hold public hearings on the issue in Manhattan May 2nd, from 11 a.m. on at 250 Broadway, Room 1923, as well as May 9th in Albany and May 10th in Rochester.

#Albany
#rent reform
#original
Do you know the scoop? Comment below or Send us a Tip