Your Guide to Voting Tomorrow and the NYC Ballot 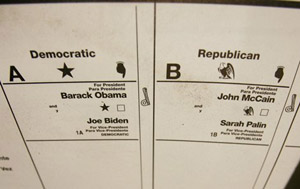 The polls open at 6 a.m. statewide tomorrow, and given the recent concern about whether the NYC Board of Elections is prepared for an anticipated massive voter turnout, you might want to consider voting early. Polls close at 9 p.m., and you can check your voting location here or by calling 1-866-VOTE-NYC. In New Jersey, polls open at 6 a.m. and close at 8 p.m; you can look up your polling place here. Polls in Connecticut are also open during the same hours as Jersey.

If you registered to vote for the first time via mail, you may be asked to provide identification at the polls. If you don't have a driver's license, you can also present a copy of a current utility bill, a valid photo ID, a bank statement or any government document that shows your name and address. If for some reason a poll worker insists you are not on the list, you have the right to ask an inspector to verify that you are at the correct polling location. And if you still believe the poll workers are wrong, you can vote using a paper or affidavit ballot that will be counted later if your registration is verified.

As always, there are a whole lot of other decisions you'll have to make in the voting booth tomorrow besides choosing between Obama or McCain. Gotham Gazette, which is published by the watchdog group Citizens Union, has taken a complete look at what's on the ballot tomorrow. 13 members of congress from New York are up for reelection, but Gotham Gazette says only one race is really competitive, the seat now held by the city's only Republican U.S. representative, Staten Island's Vito Fossella, whose career ended in scandal.

And in the state legislature, Democrats are vying to wrest control of the Senate from Republicans. Two races in NYC districts are seen as competitive: Queens Republican incumbents Serphin Maltese and Frank Padavan are believed to be in a tight race with Democratic challengers. And one city council seat is on the ballot for Queens voters: Councilmember Anthony Como (R) is again facing Elizabeth Crowley (D) after a previous special election in June came down to just just 41 votes.

Read more about the judicial races that will be decided tomorrow, as well as a special ballot proposal affecting disabled veterans who want to take the civil service exam. And Starbucks locations will be giving out free coffee to voters tomorrow!