You Can't Fight the Rats at City Hall Park 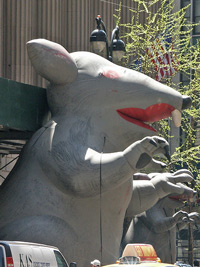 The elements that have made City Hall Park so attractive to New York's humans have also made the area hospitable to the city's rodent population--so much so that the park has become overrun with rats, who don't seem to mind people company as much as people mind rat company. Regardless of the time of day or the number of people congregating there, rats--lots and lots of them--have made City Hall park their home.

The New York Times reports that a $30 million renovation of the area in 1999, including picturesque shrubbery that provides ground cover for rodents and many garbage cans that visitors regularly fill with discarded food, has created a "verdant oasis" for urban rats. In addition, the existence of the abandoned subway tunnel below City Hall Park serves as a wintertime haven for rats.Certainly, rats populate most of New York's parks, but they have become hard to ignore at the densely populated square south of City Hall.

Rats freak us out, but we suppose less so than when they're running rampant in NYC restaurants. The rodents became bestseller material when Robert Sullivan chronicled their existence in New York by his pestileponymous book. Much earlier, Joseph Mitchell wrote an article titled "The Rats of the Waterfront," which is appreciated here.