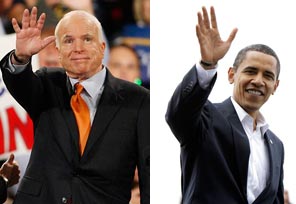 Lately, as John McCain trails Barack Obama in the polls, the McCain-Palin camp has been seizing on Obama's connection to former 1960s radical William Ayers, founder of the Weather Underground. Vice presidential candidate Sarah Palin has accused Obama of "palling around" with Ayers, calling him a domestic terrorist, and, now, Yonkers City Councilman John Murtagh is joining the criticism--a move that Daily News calls "desperate."

When Murtagh was 9 years old and his father, Justice John Murtagh, was presiding over a trial of the Black Panthers in 1970, his family's home was firebombed, supposedly by the Weather Underground. Murtagh said, "Barack Obama may have been a child when William Ayers was plotting attacks against U.S. targets - but I was one of those targets."

"I'll repeat again what I've said many times. This is a guy who engaged in some despicable acts 40 years ago when I was eight years old. By the time I met him, 10 or 15 years ago, he was a college professor of education at the University of Illinois... And the notion that somehow he has been involved in my campaign, that he is an adviser of mine, that... I've 'palled around with a terrorist', all these statements are made simply to try to score cheap political points...

"I am surprised that, you know, we've been seeing some pretty over-the-top attacks coming out of the McCain campaign over the last several days, that he wasn't willing to say it to my face. But I guess we've got one last debate. So presumably, if he ends up feeling that he needs to, he will raise it during the debate."

Obama also questioned why McCain was focusing on that line of attack instead of discussing the economy. Murtagh, for his part, told the Daily News, "The issue is really not an attempt on my family's life. The issue is Barack Obama's judgment."

The NY Times recently looked at the Obama-Ayers connection, finding that while it seems like Obama may have downplayed his "contacts with Ayers," who is a fixture in education and anti-poverty groups, "But the two men do not appear to have been close." Earlier this year, when the Ayers connection was brought up in the primary race, the Washington Post reported Ayers did donate $200 to Obama's State Senate re-election campaign and "moved in the same liberal-progressive circles." And Michelle Obama discussed Ayers on the Daily Show and Larry King show, noting that Ayers and Obama both served on the board of the Annenberg Challenge. When Larry King brought up that it was started by the Annenberg family, she pointed out that Mrs. Annenberg is a McCain supporter.