Yet Another Woman Groped In Brooklyn, $12,000 Reward Offered

Oh for crying out loud, ANOTHER groping in Brooklyn? Yes, sadly, last night some deviant p.o.s. sexually assaulted a woman walking her dog in Windsor Terrace on 17th Street near Seventh Avenue, around 10 p.m. Police say the sick puppy sneaked up behind his victim, told her he had a knife, and felt her crotch. She screamed, he ran away, and the unidentified female joined the growing roster (13 or 14?) of victims—though investigators say it's too early to tell if this assault fits the pattern.

Two arrests have been made so far, but the attacks have continued with some regularity. On Sunday night, another woman was sexually assaulted on Vanderbilt Street in Windsor Terrace, not far from the scene of last night's incident. Yesterday Adolfo Martinez was arraigned and officially charged with sexual abuse and forcible touching after allegedly groping an 18-year-old woman in Sunset Park. (Prosecutors say Martinez has admitted to the attack, and that after grabbing his victim's buttocks, he departed with the words, "Adios, mami!")

The NYPD is offering a reward of $12,000 for information to the arrest and conviction of the person or persons who've been behind the attacks. And as of yesterday, the total of suspect sketches released by the NYPD totaled six. Police believe as many as three people may be responsible for the attacks, and the Times reports that "the uncertainty of what detectives know or whom they are seeking underscores the diverse makeup of serial molesters, who can come from all walks of life, with all manner of psychosexual drives." The Times article is an interesting look into the forensic psychology of serial sex offenders:

Cases in which no strands of DNA are left behind can be difficult for the authorities to investigate and prosecute, said Linda A. Fairstein, who spent a quarter-century as Manhattan’s chief sex-crimes prosecutor. However, she said, some assailants may work themselves into such a heightened state of arousal just prior to grabbing a woman that afterward they may leave potential biological evidence.

Others, she said, carry out frottage — rubbing for the sake of sexual gratification — particularly in crowded places like Rockefeller Plaza at Christmastime. "If I had a dollar for every guy that stood in those crowds, and stood behind an adult woman rubbing against her, an adult-groper-frotteur, I’d be a very rich woman," Ms. Fairstein said.

As it happens, the peak frottage season is almost upon us: the Rockefeller Center skating rink opens for the season next week. 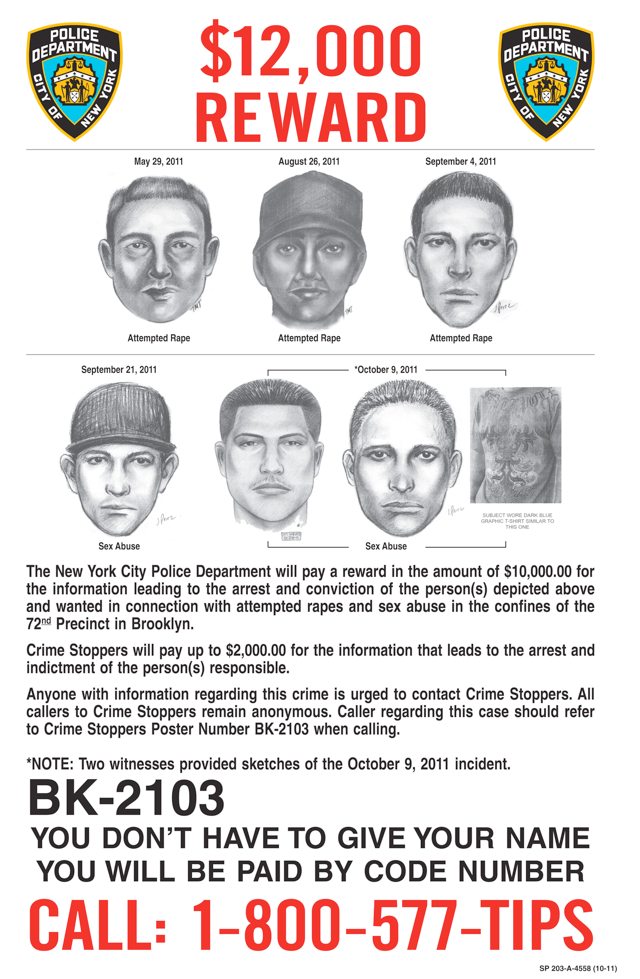 #brooklyn
#groper
#nypd
#park slope rapist
#reward
#sexual assault
#windsor terrace
Do you know the scoop? Comment below or Send us a Tip