Yes, People Are Still Suffering Because Of Hurricane Sandy

Remember when Sandy hit New York, and you had a sleepover with your friends and watched TV waiting for the power to go out but it never did and then you went to brunch? Can you believe that was a year ago already? Neither can the hundreds of people from neighborhoods still suffering the after-effects of the storm who rallied at City Hall yesterday to decry what they called a "tale of two recoveries."

Organized by a coalition of dozens of the city’s environmental, labor, immigrant, religious and community organizations calling itself the Alliance for a Just Rebuilding, the rally was intended as a reminder to the next mayor that while things may be back to normal in the city’s wealthiest neighborhoods, many parts of the city that were already struggling before the storm are still reeling a year after Sandy.

Some of the speakers blamed the scope of Sandy’s effect on the Bloomberg administration’s longstanding priorities. “If they had been putting infrastructure into people instead of into business, we wouldn’t have had lives lost and schools closed,” said Michael Johnson, from the South Bronx. “Poor people suffered the worst. There’s something wrong with that.”

Speaking to the crowd through tears and a translator, Maria Lulu Velazquez, a mother from Midland Beach, told of the struggles of her family’s continuing displacement from their Staten Island home. “We ask the next mayor to take us into account, and not ignore us because we are immigrants,” she said. “We were all affected by Sandy.” 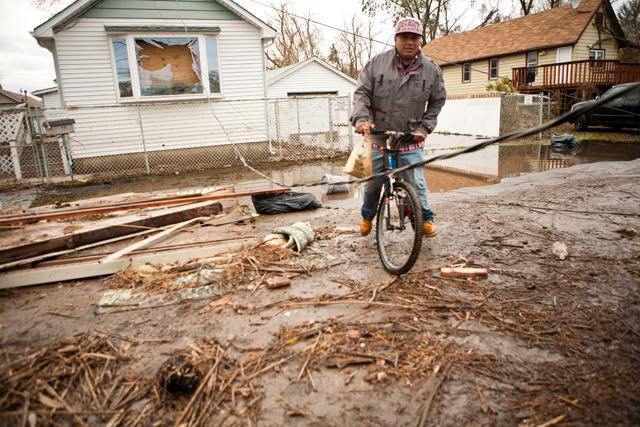 The sheer number of grievances voiced at the rally was overwhelming: Hospitals in poor neighborhoods that valiantly served communities through the storm are being shuttered; plans for rebuilding don’t include adequate affordable housing; public housing officials remain unresponsive to residents; schools and apartment buildings are still relying on portable external generators and boilers.

Nearly all of the $648 million in federal aid earmarked for housing recovery efforts has yet to be disbursed. Later this afternoon Mayor Bloomberg and HUD Secretary Shaun Donovan are set to announce the release of the second portion of the $1.77 billion in federal aid for the city (the $648 million is part of the initial allocation announced in May).

A member of Local 78 Asbestos, Lead & Hazardous Waste Workers recalled seeing huge high-tech trucks pumping out buildings in the Financial District days after the storm. Meanwhile, at the city's peripheries, residents count themselves lucky if their home hasn't been colonized by dangerous mold. “You go down to Wall Street now, it looks like [the storm] never happened,” he said. “Our communities are still the same. The change hasn’t come to us.”

Nick Pinto is a freelance writer living in New York. His previous coverage for Gothamist includes a report on Occupy's undercover plant, a recent federal court hearing into the NYPD's surveillance program, and the trial of Vietnam veterans arrested at the Vietnam Memorial.

#alliance for a just rebuilding
#hurricane sandy
#midland beach
#original
Do you know the scoop? Comment below or Send us a Tip