Yellow cab drivers have a seen a loss of 15 to 20 percent in revenue since the state’s congestion pricing surcharge went into effect last month, according to The Taxi Worker’s Alliance, which arrived at the estimate after reviewing trip records from drivers. The congestion pricing fees are expected to generate $400 million a year for the MTA, but several taxi drivers interviewed on Wednesday said the fundraising initiative is cutting deeply into their already slim margins.

Under the congestion pricing fees that went into effect in February, yellow cab passengers pay a $2.50 surcharge for rides below 96th Street in Manhattan. Other for hire vehicle riders pay $2.75. Uber said at the time that it would raise prices to cover the cost.

Taxi Worker's Alliance executive director Bhairavi Desai is calling on state lawmakers to make an exemption for yellow and green cabs because they’ve been paying a 50 cent surcharge to the MTA since 2009.

Desai argues that taxi drivers face fees and fines unlike another business in the state. For example, if a driver does a small trip that costs $10, the taxes on that ride would be nearly 30 percent. Drivers are required to pay state taxes at the end of every month, and face a 200 percent fee if they’re late.

“There is no such late fee for any other state tax,” Desai said. “The economic impact and the real possibility that the crush of all this could lead to the dissolving a 100-year old industry just seems really unprecedented. And it just feels like the fix is in.”

The Taxi Worker’s Alliance counters that January is usually a slow month, and that February is when rides should pick up; there was an 11 percent increase in yellow cab rides from January to February in 2018. 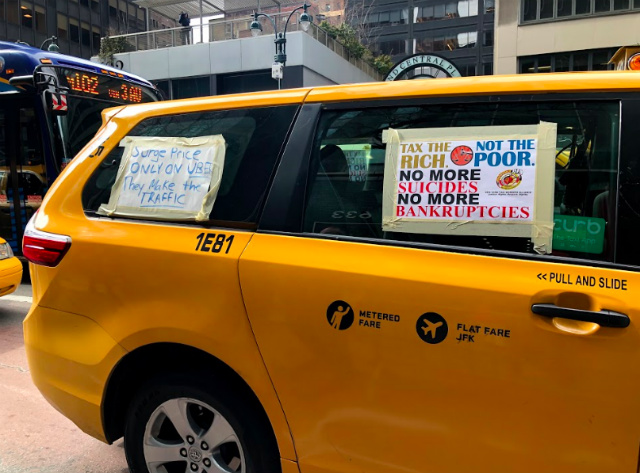 Outside of Penn Station on a recent morning a steady stream of yellow taxis lined the curb. One customer after another popped in, and each cab was quickly replaced by another.

Bikram Singh has been a cab driver for 12 years and said he made $1,000 less in February, compared to January. “Lot of people not taking cabs, they’re walking,” he said. “Mostly people avoid taking taxis, they say the price is too high, this is not the taxi driver's fault.”

He thinks it would be more fair if Cuomo imposed congestion pricing fees on all drivers, and he hopes at least that way traffic would be reduced.

Manjit Singh, a medallion owner who's been a cab driver for over 25 years, agreed that in the last month he's seen a not-insignificant drop in passengers—some days he said he’s driven around for an hour without getting a customer. Mostly, he’s noticed a drop in short trips.

But the first month with the congestion pricing surcharge has been a boon to other cabbies. Henni Cooper’s been a driver for over five years and said despite the extra charge, her income went up last month.

“More riders, more tips,” Cooper said. “They still tip me, as a matter of fact my money has increased, I'm happy about that part."

The Taxi and Limousine Commission declined to comment on the driver’s complaints about loss of income from the surcharge.

100 taxis with the @NYTWA driving/protesting around @NYGovCuomo office in NYC today! Every time they pass the governor’s office, they furiously beep pic.twitter.com/5HWTb0ATjI

On Wednesday afternoon, dozens of cab drivers honked their horns outside of Governor Andrew Cuomo’s Midtown office to protest the new surcharge.

“It’s affected our business. Sometimes people don’t tip,” said Mohamed Hasan, a yellow cab driver of over 15 years. “When [the surcharge] first started, three people got out of my car. They went inside, I pressed the meter, and they got out.”

Paramjit Singh, another yellow cab driver at the protest, said he has been in the business for almost 25 years.

“They’re going to kill us because we’re not getting small fares, and we’re not making enough money,” Singh said. “If we make $200 or $300 every day, we have to pay for congestion price. It’s almost $100 everyday. I have my gas, car, and mortgage for the medallion. How can I pay my mortgage if I’m not making any money?”

Asked for comment on the protest, Cuomo spokesperson Patrick Muncie said, "The surcharge on all rides in Manhattan's central business district is a positive step in our efforts to find a dedicated revenue stream for our subways and buses, as well as easing congestion throughout the district. More than $1 million a day is now going directly to the MTA, and we are moving forward vigorously with a full congestion pricing plan that will cover a total of $15 billion for the MTA’s capital budget to ensure New Yorkers have a safe, reliable transportation system."

#congestion pricing
#congestion surcharge
#taxi
#tlc
#original
Do you know the scoop? Comment below or Send us a Tip