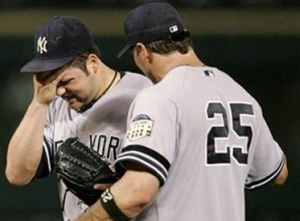 Yankee phenom Joba Chamberlain was arrested and charged with a DUI in his home state of Nebraska early Saturday morning. Chamberlain was pulled over at 1 a.m Saturday on US 77 near Lincoln, the town which he hails from as well as the home to his glory days as a star pitcher for the University of Nebraska.

Police said Chamberlain was driving alone when they pulled him over for speeding, then smelled boozed on his breath and spotted an open container on the front passenger seat of his 2006 BMW. Cops took Joba to the Cornhusker Place, the drunk tank in Lincoln where he spent the night.

Chamberlain became a fan favorite as a rookie who pitched his way out of the bullpen and into the starting rotation this season, where he is expected to stay next year. The arrest comes as a surprise to those who know Chamberlain to have a wholesome reputation and sounds more like something that would be expected of the Joba impersonator who was arrested in the Jersey Shore after scamming free drinks and bedding numerous women throughout the summer.

#dui
#joba chamberlain
#nebraska
#sports
#Yankees
Do you know the scoop? Comment below or Send us a Tip
A new Gothamist is coming! We’ve moved comments over to our beta site. Click here to join the conversation and get a preview of our new website.