Yankees Won't Have Wang For Awhile 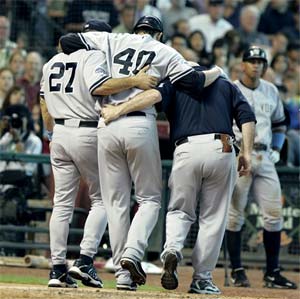 The Yankees are going to have to figure out a way to survive without their ace for possibly the remainder of the season. Tests Monday found that Chien-Ming Wang had a sprain of his Lisfranc ligament and a partial tear of the peroneal longus tendon in his right foot. In the best case scenario, Wang takes off his protective boot around July 28th, starts to rehab and gets back on the mound for the Yankees around September 1st. In the worst case, Wang is done for the year. Anyway you slice it, the Yankees can expect Wang to miss at least 65 games and 12 or so starts.

Who will pick up the slack in the rotation? Phil Hughes is going to be out until August and Ian Kennedy is still on the DL. For the foreseeable future, you can probably pencil Dan Giese into the rotation unless the Yankees get crazy and give Igawa another shot. Perhaps a trade for C.C. Sabathia will be put into motion? One thing is for sure, the Yankees can be thankful that Joba Chamberlain is in the rotation right now.

According to Hank Steinbrenner, Yankees co-chairman and principal loudmouth, the National League's antiquated rules are to blame for Wang's injury. Steinbrenner said that the NL needs to get with the times and institute the designated hitter, "I just think it's time the NL joined the 21st century. The AL, the minors, colleges, high schools, they all have DHs." He went on to say that baseball commissioner Bud Selig needs to do something, "It's something Bud needs to address and he needs to address it soon. Don't give me that traditionalist crap." Yes, that's right, there are no traditions worth keeping at all in baseball. Maybe it's time to put names on Yankees uniforms. Don't give us that traditionalist crap.

#baseball
#Chien-Ming Wang
#Dan Geise
#joba chamberlain
#Kei Igawa
#sports
#Yankees
Do you know the scoop? Comment below or Send us a Tip