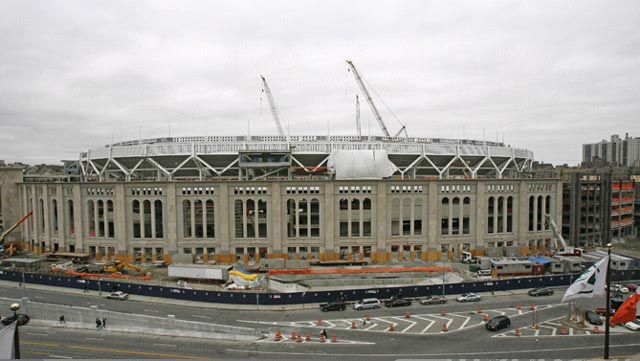 The NY Yankees has reportedly asked city for $350 million more in public financing for its new stadium. The $1.3 billion project is currently under construction, and the urgency for additional funds in the form of tax-free bonds ranges from Assemblyman Richard Brodsky saying "the Yankees said they couldn't complete the Stadium without additional financing" to the NYC Economic Development Corporation president saying the Yankees are just making "informal inquiries."

An NYC EDC spokesperson said that the Yankees can't get the additional financing because of an IRS rule that "prohibits more public debt to be incurred for the stadium," but the city is trying to help the Yankees--not to mention other sports teams--get around the rule. However, Good Jobs New York director Bettina Damiani told the Post if the IRS reverses that regulation, the "floodgates" would open, "It defies all fiscal common sense to subsidize wealthy sports teams."

Yankees team president Randy Levine sought to calm things down by explaining, "This issue does not affect completion of the Stadium," noting the organization always considered "additional bonding." Keep in mind that the Yankees have already received $900 million in tax-free bonds (the Mets received $500 million in tax-free bonds for CitiField). Here's The Motley Fool on what bonds are and here's Wikipedia's entry on new Yankee Stadium financing. More recently, residents near the stadium have complained the new stadium has robbed them of their park space.

#bronx
#financing
#new Yankee Stadium
#nyc
#tax free bond
#yankee stadium
Do you know the scoop? Comment below or Send us a Tip
A new Gothamist is coming! We’ve moved comments over to our beta site. Click here to join the conversation and get a preview of our new website.