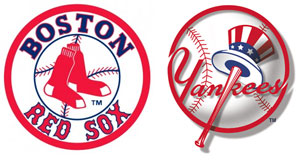 A Red Sox fan paid the ultimate price for his allegiance this weekend when he crossed paths with a Yankees fan in New Hampshire. Ivonne Hernandez, 43 years old and a Yankees fan, is charged with fatally running him over.

Hernandez, who was drinking at a Nashua, NH bar on Friday night, announced that she said she was a Yankees fan. The Boston Globe explains, "Nashua, 45 miles northwest of Boston, is Red Sox country."

A bartender says she got into a fight with some patrons that spilled outside. The group chanted "Yankees suck!" when they saw a Yankees sticker on Hernandez's car. The taunting apparently was too much for Hernandez; a prosecutor said, "She never braked, and she accelerated at a high speed for about 200 feet. She went directly at this group of people."