Yankees Ready to Whimper out of Yankee Stadium 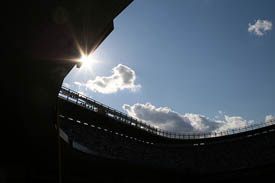 When the first-place Rays and fourth-place Yankees open a three-game series at Yankee Stadium tonight -- weather permitting -- it will mark the final time the team starts a homestand in the old ballpark. A venue that has seen more dramatic moments than any other will be closed with a whimper after 10 more games. The Yankees sit 8 1/2 games out of a wild-card berth, and their "tragic number" -- the number of combined losses by them or wins by the Red Sox that will eliminate them from the postsesaon -- is nine.

Thirteen straight trips to the postseason or not, the Yankees will bid farewell to their ballpark a week from Sunday against Baltimore. Sure, the team is going out in a lame way. But the stadium's history is enough to make the last games enjoyable. With the playoffs out of the question (Baseball Prospectus says the team has a .09 percent chance), fans can celebrate the 85 years of history rather than fret over the result of the last games. In some ways, ending it this way is better than hanging in limbo only to miss a playoff spot in the season's final moments.

If you don't have tickets to the final games, you can try looking on StubHub.