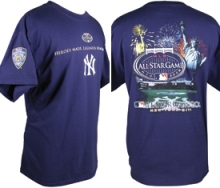 While ticket prices at the new Yankees Stadium prices are high, the last season at Yankee Stadium is also proving lucrative with all sorts of memorabilia to remember the house that Ruth built.

Yesterday, pitcher Joba Chamberlain unveiled a special All-Star Game T-shirt at Modell's in Times Square. Since the game is being held at Yankee Stadium, the shirt features the phrase, "Heroes Made. Legends Remembered, with images of Yankee Stadium, the Statue of Liberty and the All-Star Game logo on the back. With each sale, $1 each will be given to FDNY Foundation and the New York City Police Foundation.

Chamberlain said, "We're going to have the best players [at the All-Star Game]. We have the best police and fire [fighters], so we want to support them and definitely give back to them for everything they do for us."

You can dress in old Yankee Stadium from head to toe if you decide to buy the special edition Crocs. The limited edition soles, sold only at Modell's stores, have, per the NY Post, "a silver Yankee signature logo and a strap featuring the official club lettering and a Yankee Stadium patch."

A Modell's spokeswoman suggested, "If you can't take a piece of the stadium, why not grab a pair of collectible Crocs shoes?" perhaps in an effort to stop further bunting bozos.