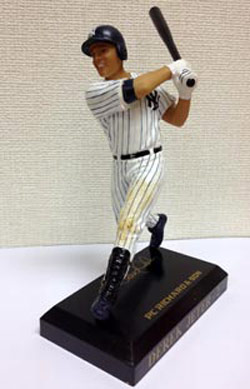 While there have been Derek Jeter figurine and bobblehead giveaways in the past, there's never been a Derek Jeter's-last-year figurine giveaway. Until now.

Tonight is Derek Jeter Figurine Night (presented by P.C. Richard), and the figurines only go to the first 18,000 attendees. Even if the game isn't sold out, Yankees Stadium's capacity is 50,000 which means it could be a perfect storm—especially if the figurines aren't even at the stadium.

Let's take a trip down Memory Lane to September 24, 2013, which was Mariano Rivera Bobblehead Night, also known as The Night the Bobbleheads Weren't At the Stadium When the Gates Opened.

The team decided to keep the gates shut until the merchandise arrived and fans became enraged as Babe Ruth Plaza filled up. We spoke with Yankees fan Ray Guido at the stadium who told us that nobody from the organization offered any explanation to fans waiting outside, sparking rumors about the situation and eventually causing chaos outside the gates. "It would have been easily avoided if they'd just sent some people out to make queue lines, seeing what the situation was, but they just didn't do that," Ardito explained. "I got here at 5 p.m. thinking that was crazy, that was way too early, but I just did and I didn't get in 'til almost six."

In a sea of Yankees fans..all because of Mariano Rivera bobblehead day #Insane pic.twitter.com/WnB1IaaAgo

We asked the Yankees whether the Derek Jeter figurines were at the stadium yet and whether they had extra security; we'll update if we get a response. Another Yankees fan suggested we ask, "Also do they have a contingency plan *if* they don't come on time, besides yelling at people 'they're just a doll, people!'" And here's the line for the Mo Bobblehead:

#baseball
#derek jeter
#derek jeter figurine
#yankee stadium
#Yankees
#yeah jeets
Do you know the scoop? Comment below or Send us a Tip