Last week, a Manhattan restaurant owner found something very valuable in the men's room: A 2013 Red Sox World Series ring. Luigi Militello told the AP, "I was like, geez, it’s big. Who would leave this here? I’m a big Yankee fan. What are the chances of this happening?" Still, he didn't let a rivalry get in the way: He returned the ring to the owner, who happens to own a Red Sox minor league team.

It turns out Drew Weber had been eating at Militello's Luke's Bar and Grill on the Upper East Side on Thursday and took it off while washing his hands. Weber, a NYC businessman and the owner of the Lowell Spinners, said, "I went looking around my apartment and started having palpitations. Sweat was pouring off my forehead. I’m looking at my finger and it’s not there." Weber called the restaurant to see if they had the ring—and they did. Militello admitted, "This being Yankees-Red Sox, I started razzing him. I told him he wasn’t getting it so easily. I was playing with him, a lot." 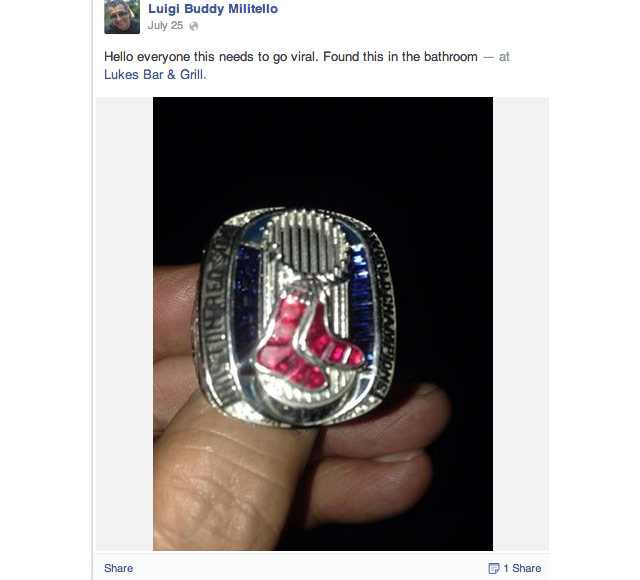 Militello has been invited to Fenway Park on September 28th for Derek Jeter's final game. Weber said that Militello "asked if he could wear his Yankees paraphernalia. I couldn’t answer him."

On the Lowell Spinners' website, it says that Weber's quote is "I'd rather be lucky, than smart."

#barts people
#derek jeter
#lost and found
#lost World Series ring
#red sox
#Yankees
Do you know the scoop? Comment below or Send us a Tip