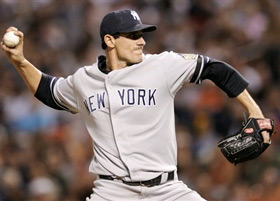 The Carl Pavano era is over in the Bronx, or is it? Yesterday, the Yankees declined their option on Pavano’s contract making him a free agent. Over his four years with the Yankees, Pavano spent more time on the DL than in the Bronx and he leaves New York $40 million richer in exchange for nine wins and 146 innings. If Cashman tries to bring him back, they both should be run out of town.

New York also declined their option on Jason Giambi. That doesn’t necessarily mean Jason has played his last game as a Yankee, the option was for $22 million, but it isn’t likely they bring him back. Giambi had an interesting stay in New York, hitting plenty of home runs, but also becoming embroiled in the steroids scandal. To his credit, Giambi admitted what he did and the fans embraced him again. At 37, it is probably best to let him go elsewhere.

Photo of Carl Pavano by the AP

#baseball
#brian cashman
#Carl Pavano
#Jason Giambi
#sports
#Yankees
Do you know the scoop? Comment below or Send us a Tip