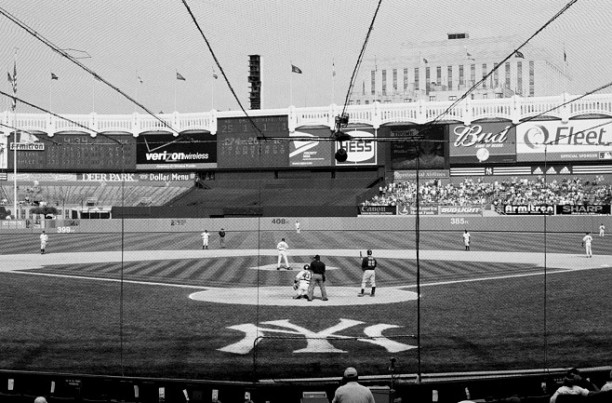 Today marks the final day of the New York Yankees ringing in a baseball season in the House that Babe Ruth Built. The current stadium has seen twenty-six World Series championship teams and holds the longest active streak for home opener wins (10 in a row so far). The Yankees, weather-permitting, will face off against the Toronto Blue Jays, with Chien-Ming Wang pitching against Toronto's Roy Halladay.

Opening day is also manager Joe Girardi's first day. Girardi, an ex-Yankees catcher, discussed following in the beloved Joe Torre's footsteps, saying, "He had an amazing run here. I understand that there are a lot of expectations when you take this job, but those expectations are never going to change." Another thing that won't change is the presence of Yankees announcer Bob Sheppard. Even though Sheppard is still recovering from a bronchial infection, a tape of his voice announcing Yankees captain Derek Jeter will be played at Jeter's at-bats today (backup announcer Jim Hall will be taking over for other names).

After this season, the Yankees will move into their new $1.3 billion stadium (the current stadium cost $2.5 million) which is outfitted with many perks for those who want to pay. But ticket scalpers are expecting $17,000 per ticket for the final regular season game at Yankee Stadium and around $25,000 for the 2008 All-Star Game.

UPDATE: Thanks to the rain, the Yankees home opener is now tomorrow night, at 7:05 p.m. Thus, the stadium's string of never having a home opener in the month of March will survive in perpetuity.

Below is a gallery of Gothamist readers' Yankee Stadium photographs, and reader Mike Mostransky has written an essay about the final season for JPG magazine.