Yankee Ball is Going, Going, Gone (to the Wrong Person?) 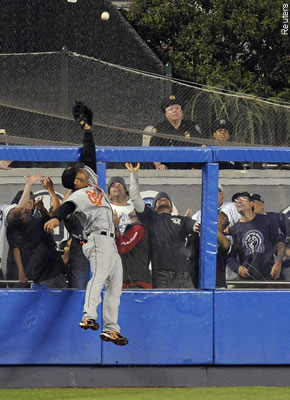 While souvenirs were stolen from every nook and cranny of Yankees Stadium last Sunday, one of the more treasured ones has spent the week at the center of controversy. Surprise, surprise.

When the Yankees' José Molina hit the last home run ever at the stadium, the ball went into a net above fans, one of whom poked his fingers through and claimed it. This was Steve Harshman of Wyoming, who told the NY Times, “I had the ball on the net and I said, ‘Well, I’m going to pull it right through this netting.’” Within the confines of the stadium there is a long-established rule regarding this type of incident: the fan lets go of the ball under the guards watchful eye, it's set free from the net, and the guard returns it.

However, when this was in the midst of going down on Sunday, Harshman claims another man jumped up and grabbed the ball when he let go. The Bronx resident, Paul Russo, says it went right into his hands. The guards took it and gave it to Harshman, but the fight over the ball--which could be worth up to $50K--continues. There's currently a ton of press about the incident, and Russo's wife has even started a Facebook page in support of her husband. Who do you support though?