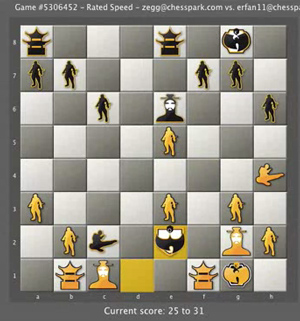 Rap artist RZA, who is a member of the Wu-Tang Clan, has an interesting sideline occupation: recreational chess champion. RZA (pronounced RIZ-a) sat down with New York Times chess man Dylan McClain to talk about his love of the game. At the Mandarin Oriental Hotel, the duo played a game and discussed how RZA became involved with chess and what it means to him.

One can see a virtual representation of the game that RZA played with McClain online. While RZA is the Hip-Hop Chess title belt holder--it's a chess tournament consisting of rap artists and martial arts practioners--McClain managed to beat the champ. There's video attached to the Times article as the interview and the game progresses that's very watchable.

RZA said he got involved in chess when he was a young man, when he couldn't even afford a board. He eventually wound up losing not only matches, but his virginity to the girl who taught him the game. He encourages other young people to take up the sport, emphasizing that it stresses the importance of long-term thinking to a community that frequently doesn't see very far beyond the present. “The way you have to think in chess is good for everyday thinking, really, especially for brothers in the urban community who never take that second look, never take that second thought.”

The Wu-Tang Clan has a site called WuChess, that allows participants to practice their board-battling skills online. A tour of that site is available here.

In the 1994 Boaz Yakin-directed film "Fresh," a young boy is mentored in the ways of chess and transfers the Machiavellian strategies he learns from his instructor (Samuel L. Jackson) to extricate himself from a harrowing home life situation.

#chess
#fresh
#rza
#strategy
#the wire
#wu-tang clan
#wuchess
Do you know the scoop? Comment below or Send us a Tip