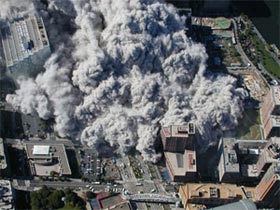 Late Thursday, right before the long July 4th weekend, it was announced the Bush administration had declined to keep on the World Trade Center health czar. Dr. John Howard was the director of the National Institute for Occupational Safety and Health within the Center for Disease Control and had much support--last Wednesday, Governor David Paterson asked President Bush to extend Howard's term, noting his "pivotal role" in 9/11 health efforts.

The NY Times reported that Howard "sometimes clashed with the Bush administration over monitoring and treatment plans" for 9/11 health registrants. Howard supported the federal funding of programs to monitor and treat ground zero workers sickened by September 11 conditions (the Bush administration cut 9/11 health funding by 77% this year). Politico mentioned that Howard had "tensions" with CDC director Dr. Julie Gerberding who told Howard his term would not be extended.

Representative Carolyn Maloney said, "It appears that the Bush administration fired Dr. Howard just for doing his job caring for Americans who are suffering as a result of 9/11. It's outrageous that the administration would treat the heroes of 9/11 so poorly on the day before our nation celebrates its independence." However, the CDC claims Gerberding wanted to "go in another direction."

NIOSH associate director Christine Branche was named the acting director, until a replacement is found, but the AP suggests lawmakers may fight to keep the position open until after the election.