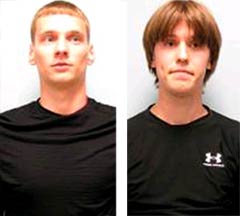 In New York, there's the Staten Island Ninja Burglar, who stealthily entered homes to steal money and other valuables. In NJ, there's the would-be Shinobi ninja warriors who were trying to rid the streets of drugs, by way of threatening letters.

Clifton, NJ police apprehended 20-year-old Tadeusz Pertkiewicz and 19-year-old Jesse Trojaniak early Wednesday morning. They were wearing "black SWAT-type vests and carried knives, throwing stars, swords, nunchucks and a bow and arrows." Apparently they were worried that an ex-girlfriend and other friends were, per the Star-Ledger, "descending into drug use," so they decided to start their two-man crew to stop it all.

The letters read, "Shinobi will stop your cruel and sadistic intentions with justified, yet merciful force" and accused drug users and dealers "committ[ing] sin of passing impurity" to others. Oh, and they brought along homemade smoke bombs, perhaps to throw into a drug dealer's house. However, police spotted them leaving a letter and arrested them before that could happen.

Petrkiewicz said he did not intend to harass his ex--his issue was that she was letting people smoke pot in her house. However, the police said, "Their intentions may have been good. But we tell everyone that they shouldn't take the law into their own hands because it will cause more problems for everyone in the long run."