Over four years ago, charter school leaders, terrified of a new Democratic mayor in New York City, scrambled for powerful allies to stymie him. Michael Bloomberg, the billionaire mayor and fierce booster of charters, was gone. His successor wanted to charge them rent and curtail their growth.

They found a friend in Governor Andrew Cuomo, a Democrat who had campaigned as a tax-cutting centrist friendly to Wall Street, where many of the charter industry’s most well-heeled backers hail from. As de Blasio tried to secure permission in Albany to raise taxes to fund a universal prekindergarten program, Cuomo went to work—to both snuff out any type of new tax and ensure charters, publicly-funded and privately-run schools, were strengthened.

De Blasio was granted $300 million to fund the pre-K expansion, but Cuomo ensured the new mayor would have the burden of housing all the charters he and his progressive allies reviled so much. Cuomo’s 2014 re-election campaign benefited handsomely: hundreds of thousands of dollars from charter backers flowed in that year.

This year, as Cuomo cruises to a second re-election, charter backers are again funding him, hopeful he will remain a steadfast ally. Judging from his rhetoric, they have little to worry about.

“I support charter schools. I support choice in education,” Cuomo said during an October 23rd debate with his Republican opponent, Marc Molinaro. (A Cuomo spokesman declined comment to Gothamist on the 2014 law.)

The stakes are much higher for charters these days—Democrats are a favorite to take control of the State Senate, where charter-friendly Republicans have ruled for the last decade. The New York State Teachers Union, which has opposed charters because they are able to circumvent unionization rules, is spending heavily on behalf of Democrats.

But little has been made of the 2014 law, and the good news for charter backers who want to protect their gains is that Democrats largely seem to be focused elsewhere. A united Democratic Senate could return New York City to a pre-2014 status quo—if lawmakers can muster the political capital for such a pitched battle.

It’s a reminder that as much as Cuomo, in his anti-Donald Trump fervor, swerves left this fall, it is his legacy of triangulation that impacts New York today. Laws are not easily undone. One of the two main drivers of growth in the Department of Education’s budget has been rent for charters. (The city is projected to spend $44 million for space at 63 charters, a jump from $27 million paid last year.)

“Once something is law, especially education law, it is very hard to take it back or get it repealed,” said Jasmine Gripper, the legislative director of the Alliance for Quality Education [AQE], a progressive education group that has opposed Cuomo. “That’s a really heavy lift.”

AQE would love to see the law repealed, but Gripper lamented that de Blasio, seemingly humbled from the loss of the 2014 fight, hasn’t taken the issue up again. “It’s hard for advocates alone to carry the water,” she said.

Charter school leaders and advocates, after years of boisterous rallies and blunt advocacy, have remained largely quiet, waiting to see how the elections shake out. A political committee bankrolled by charter advocates has spent relatively little on the Republicans this fall.

“Charter rental assistance is a win for all kids. It has freed up space in DOE buildings for Pre-K and other programming and ensures that parents in low-income communities can have school choices like they do in affluent ones,” said Jenny Sedlis, the executive director of StudentsFirstNY, a major charter lobbying group in the state. “Undoing the law would harm thousands of children from low-income communities and overcrowd school buildings, which no one wants to do.”

Democrats in Albany have been mostly mum. State Senator Shelley Mayer, who would chair the Education Committee if Democrats take control of the chamber in November, declined to comment on education issues until the elections are decided. Assemblywoman Catherine Nolan, the chair of the Assembly’s Education Committee, didn’t return a request for comment.

Other advocates have more hope. Leonie Haimson, the executive director of Class Size Matters, an education advocacy group that has been strongly critical of charter co-locations, said advocates in her circle are already gearing up for a push to repeal the 2014 law.

“We are working on a whole raft of proposals,” she said. “We think there’s a good chance the Senate will flip and the new Democrat-led Senate will be much more amenable.”

Haimson pointed to the Senate’s Education Committee as a cause for optimism: if Democrats, now a single seat shy of the majority, take the Senate, a Democrat will not only chair the committee but three former members of the Independent Democratic Conference will no longer sit on it. The IDC was an eight-member group of breakaway Democrats who formed a power-sharing agreement with Republicans to help keep them in the majority.

The peculiar coalition, which came crashing down this year after Cuomo (following years of enabling the IDC) forced a reunification with the mainline Democrats, was vanquished for good when six out of eight ex-IDC members lost primaries this September. 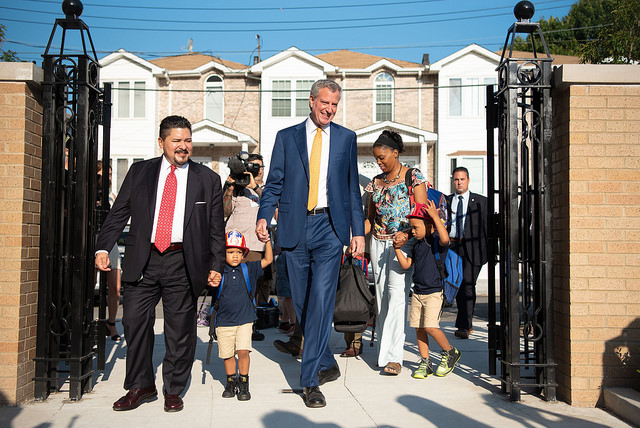 The IDC’s existence had profound implications for education in New York City. Most pivotal education policy, including mayoral control of public schools, is set at the state level. The charter sector lavishly funded the IDC; their old leader, State Senator Jeff Klein, was a strong supporter of charter schools.

Robert Jackson, a Manhattan Democrat who defeated a former IDC member last month, said he would join the fight next year to stop requiring the city to pay for charter school space.

“This law that prioritizes space for charter schools over the needs of children in overcrowded public schools should not have been passed,” Jackson said in a statement to Gothamist. “I support repealing this law and to work to finally fully fund our public schools.”

If Democrats take the majority in 2019, there will be a clamor for quick change. Chipping away at charters will join a long list of pent-up demands: passage of the DREAM Act, the Reproductive Health Act, a bill to create single-payer healthcare, campaign finance reform, a strengthening of the city’s tenant laws, along with renewal of mayoral control of schools, which de Blasio would like to extend far more than a single year.

That will likely be the most immediate, uncontroversial change—Republicans in the Senate, disdainful of de Blasio’s education policies, humiliated the mayor with single-year renewals and threatened to throw the city’s school system into chaos. (Republicans, who Bloomberg financially supported for many years, once granted Bloomberg a seven-year extension.)

Since his battle with charters four years ago, de Blasio has shied away from inviting their public wrath. A City Hall spokesman, Raul Contreras, gave no indication the mayor had any interest in revisiting a law that enraged so many defenders of traditional public schools.

“Our priority is investing in high-quality options for all our students and that includes charter schools in accordance with the law,” he said.