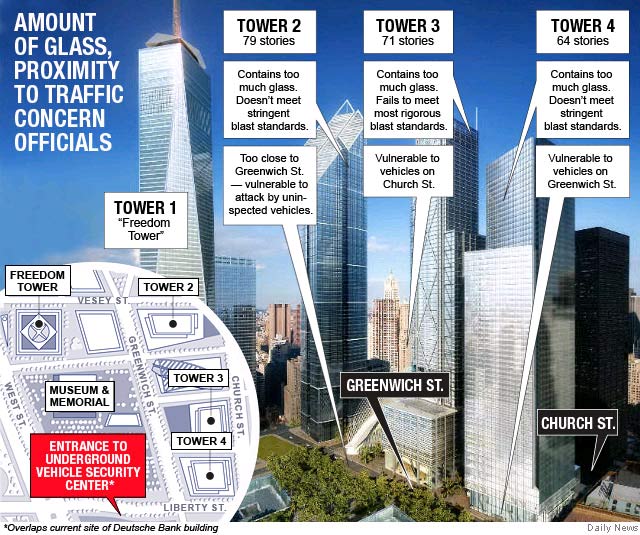 You may recall that the original Freedom Tower design had to be scrapped (because the NYPD thought it was too susceptible to attack) and redesigned with a concrete base. Now the Daily News' I-Team takes up concerns law enforcement officials have with "security weaknesses" in the new towers at World Trade Center.

The three new towers have too much glass and are "positioned too closely to city streets, increasing their vulnerability to attack." Also, it's expected that daily inspection of "some 2,000 delivery trucks and sightseeing buses" will be difficult and the "vehicle security center...hasn't been fully designed and relies on vehicle inspection technology that hasn't even been developed yet."

Various state officials involved with the plan say safety concerns are top of mind and the technology will be in place when the buildings are completed. When the NYPD was interviewed, the comment was, "The NYPD has been in talks with the Port Authority, but we don't disclose any information about possible security vulnerabilities for obvious reasons."

The News also remarks that the buildings don't "meet Department of Defense or Department of Homeland Security blast standards," which skyscrapers rarely follow but are what embassies are built to. It would be unrealistic to think of the redeveloped World Trade Center as entirely impenetrable, but given its symbolic importance and history of two attacks, the article inevitably raises a form versus function debate and questions about whether anything should have been built there after the first WTC fell.

You can see developer Larry Silverstein's WTC vision here and FEMA has a library of documents, "Building Design for Homeland Security," which shows different methodologies for determining risk.