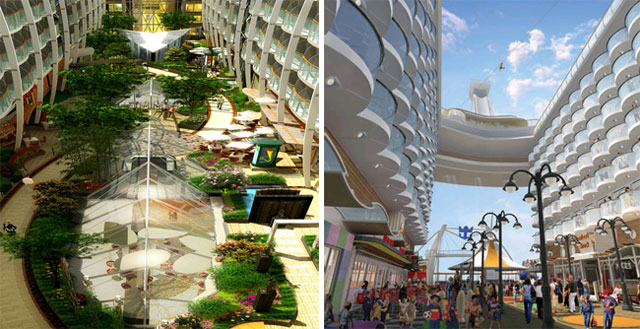 Yay, another massive cruise ship to fill our oceans with sewage and sludge so that bored pensioners can distract themselves from their impending deaths is being built in Finland, and this one's going to be the biggest one yet! Royal Caribbean's Oasis of the Seas has a 1,200-foot-long hull that rises 213 feet above the waterline and displaces 220,000 gross register tons. That's 42 percent grosser than the Independence of the Seas, which was the largest when it was christened two years ago, and five times the displacement of the Titanic, according to the Post.

The Oasis will be divided into seven distinct neighborhoods and feature a football field-size "Central Park" and a Coney Island-style boardwalk. It's unclear if the park will be packed with aggro weekend warrior cyclists in spandex, or if the Coney Island-style will include a Ruby's, but it will have a zip wire, psychics and a tattoo parlor. And the Central Park will have horticulture classes and restaurants. Tavern on the Green's Jennifer LeRoy is not going to be happy about missing out on this synergy.

The 2,700 staterooms will include 28 duplex "New York-style loft" suites, and when the liner sets sail in December '09 it will be able to accommodate 5,400 passengers. It's costing Royal Caribbean $1.4 billion to build, which may seem like a lot until you check out the boss video of all the myriad amusements on the liner's 16 decks. Two words: Flow Rider. See for yourself after the jump.