World's 85 Richest People Are As Wealthy As 3.5 Billion Humans

In a recent survey of members of the World Economic Forum, inequality was named as the most serious threat to the global economy. That survey is a threat to the 85 people who control $1 trillion of the world's wealth, an amount equal to what the poorest 3.5 billion possess.

That figure comes from an Oxfam study [PDF] that the organization is using to shame some of the attendees at the Davos summit. Oxfam is urging the elite to refrain from shirking their tax responsibilities, stop using their wealth for political favors that "undermine the democratic will of their fellow citizens," support a living wage,and "challenge governments to use their tax revenue to provide universal healthcare, education, and social protection for citizens."

Which is to say, do the exact opposite of what has been done. 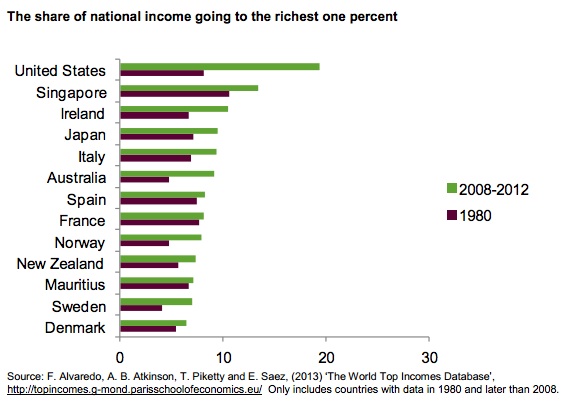 Using more recent data [PDF], Oxfam has revised the number of billionaires who control $1 trillion of the world's wealth from 85 to 92.

#davos
#economic inequality
#it's a small world after all
#rich people
Do you know the scoop? Comment below or Send us a Tip