World leaders convening for the G20 summit agreed they will "do more" (in the worlds of British Prime Minister Gordon Brown) to help bolster their economics and the global economy as a whole--not that they had any other choice. However, the NY Times reports, "they put off thornier decisions about how to overhaul financial regulations until next year, providing a serious early challenge for the Obama administration." 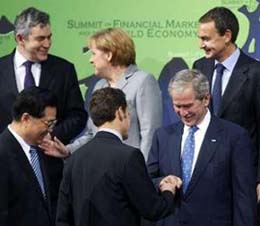 The leaders did agree to what the Washington Post calls a "far-reaching action plan that, over the next 4 1/2 months, would begin to reshape international financial institutions and reform worldwide regulatory and accounting rules." Read the PDF here; the Times explains, "In a five-page communiqué that mixed general principles with specific steps, the G-20 pledged a new effort to bolster supervision of banks and credit-rating agencies, scrutinize executive pay and tighten controls on complex derivatives, which deepened the recent market turmoil."

Still, some wanted more details: One analyst told Bloomberg News, "This isn't a strong action statement on addressing the matters at hand," and suggested "markets may be vulnerable after the weekend meeting because there was no clear pledge for coordinated tax and interest-rate cuts." But President Bush said, "A (single) meeting is not going to solve the world's problems." He had a lighter moment with French President Nicolas Sarkozy, when they pounded fists.

The next G20 summit is planned for April 30--when President-elect Obama will be President (Obama did not attend, instead sending advisers including Madeleine Albright). For reference, here's the White House fact sheet on yesterday's meeting. And about 200 demonstrators protested the meeting; from the Washington Post: "A group of costumed students called the Radical Cheerleaders chanted, 'Five, six, seven, eight, we don't want your corporate state!'"

#G20
#global economy
#president bush
#president-elect obama
#world economy
Do you know the scoop? Comment below or Send us a Tip