Employers who pay their workers with so-called "payroll cards"—an alternative to paper checks or direct deposit that looks a whole lot like a debit card—may finally be forced to spare their employees the steep fees associated with taking out cash and checking their balances.

"An honest day’s pay for an honest day’s work should never come with an asterisk,” Governor Cuomo said in a statement supporting new legislation to better regulate payroll cards. “These regulations crack down on one of the more underhanded forms of wage theft."

Attorney General Schneiderman proposed the Payroll Card Act last year, when he looked into the matter, and found that many payroll card programs charge fees for all ATM withdrawals and point-of-sale transactions. 75% of the employees at 38 local and national companies that contributed data to Schneiderman's study, including Wal-Mart, McDonald's, and Walgreens, were charged fees while attempting to access their wages.

These fees are an especially big deal for minimum wage hourly workers, who make up the majority of the state's 200,000 payroll card holders. Last winter, the New Economy Project, the New York Public Interest Group, and the Retail Action Project did an internal survey of 33 workers paid via payroll card in New York City, and found that more than half of them made $12 an hour or less. Here's a breakdown of the fees they dealt with, to their knowledge: 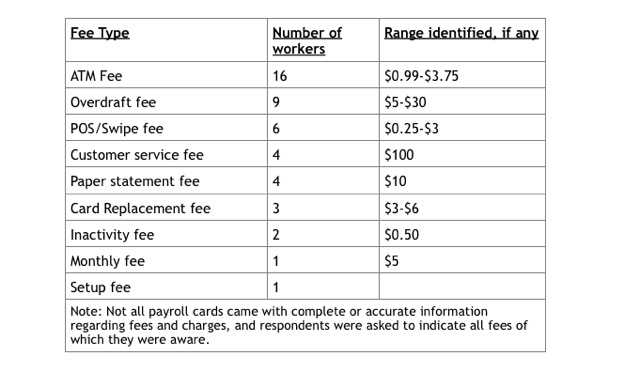 Of these 33 workers, 48% of them said they weren't given a choice to opt out of the plastic. “I was given the card before I was told I was being paid with a paycard," one anonymous survey respondent said. Under the proposed legislation, employers would have to get written consent from an employee before administering a payroll card.

The proposed legislation would also ensure that employees who opt for the card get unlimited free ATM withdrawals within a local network, and that all fees associated with customer service, account maintenance, overdraft and inactivity would be nullified.

Melvin Jefferson, who managed the Union Square Burlington Coat Factory in 2013, detailed his payroll card woes in a 2014 petition urging the company to be transparent about the fees associated with this type of pay. He says that the card was "recommended" to him by his employer:

It turns out there was a lot I didn't know about the card. We never got paper pay stubs. If we wanted them for any reason, we had to pay $3 per stub to have a hard copy sent to us. That's a lot of money when you just make $8.55 an hour like I did. Burlington uses an online payroll system we can log on to, but many of us can't afford a smartphone, a computer, or internet access. We also had to pay a fee to use an out-of-network ATM—so the ATM would charge us a fee, then the card company charges another fee. You could pay $7.50 just to get your own money!

According to Visa, a payroll card deposit costs an employer $0.35 compared to $2.00 to issue a paper check, and Visa reports that employers who have switched to payroll cards have saved up to 65% in payroll processing costs.

However, reporting on the payroll card trend in 2013, the Times pointed out that many low-wage workers don't have bank accounts, and that "fees on the cards are usually lower than those associated with check-cashing services."

A vote will take place before the end of the state's legislative session in June.

By
David Brand
and
Chau Lam