Jessica Parker, a freelance consultant, emailed Jazz Age Lawn Party founder and bandleader Michael Arenella in mid-September explaining that she didn't want to continue pitching sponsors for his events until he paid her in full for months of work she'd done for him. The email included her itemization of outstanding payments stretching back to May, totaling $12,610. "I'd provided the work and services for which he was yet to pay," she recalled recently. "And the amount had grown to be too much."

Parker said Arenella paid down $2,000 in October, but she has since stopped working for him because of the outstanding balance.

Last week, Arenella confirmed allegations that he had missed multiple payment deadlines for about 30 people he hired to work the August edition of the lawn party, a popular 1920s-themed dance and picnic on Governors Island. The event took place in the middle of a heat advisory, and Arenella has since said that the unfavorable weather "completely destroyed" the event—low turnout, low bar receipts.

Now, new allegations from 10 workers and performers, as well as emails shared with Gothamist, indicate there may be dozens more outstanding payments—including for work performed outside that August weekend. Workers also allege a pattern of delayed payment for work performed over the last several years. Most workers alleged overdue payments ranging from $300 up to $1,000 for more skilled work, or multiple gigs. Several people asked that their names not be used because they are still hoping to get paid. Others who eventually settled up with Arenella said they fear jeopardizing future gigs by speaking out.

These frustrated workers include musicians, dancers, event producers, and others hired to help create Arenella's signature aesthetic. In addition to the Jazz Age Lawn Party, Arenella puts on smaller seasonal events like the Winter Ball and Valentine's Day Sweetheart Soiree. His band also reportedly performs at about 60 weddings per year.

In a December 5th email obtained by Gothamist, Arenella apologizes to 29 musicians who are still owed money for the August event and other gigs. "Dear Musicians," he writes. "I've been working night and day to bring in the money you so deserve for you [sic] hard work during August and since gigs. I can't apologize enough for the late payments and excessive amount of time it has taken to pay you."

One musician said he is owed $800 for the August lawn party and another gig prior to that, and that the most recent commitment he received from Arenella was "by Christmas."

"We're the guys who have been with him since day one. He's stiffing us too, that should be noted," he said. 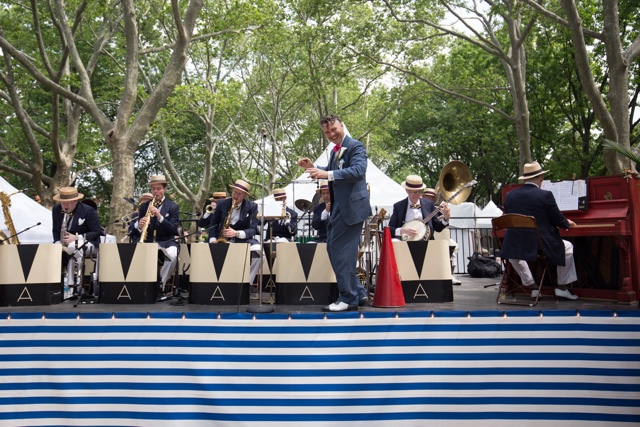 Michael Arenella, conducting, has yet to compensate workers he employed at his August 2016 Jazz Age Lawn Party (Sai Mokhtari/Gothamist).

Arenella confirmed that about 200 people worked each day of the August event. Tickets this past year ranged in price from $35 up to $5,000.

"I am a small business owner and artist working hard to be upfront with those who work beside me to create this beautiful treasured New York event," Arenella told Gothamist this week. "I take responsibility for the problems at hand and I am working to rectify the situation daily." He continued:

The lessons we've learned from the August heat wave have prompted us to restructure the event and business. We have safeguarded the event from ever being in this predicament again. For example we will be prepaying a staffing agency before each event to ensure all staff is paid.

Late and nonpayment is common in the performing arts industry. A July 2015 Freelancers Union study found that 79 percent of workers in the industry reported trouble getting paid at some point in their careers.

"Musicians are exploited all the time by producers, by venue operators, by festivals who are willing to take advantage of the desire to create art," said Chris Carroll, a spokesman for the Associated Musicians of Greater New York, a musicians' union. He confirmed that multiple musicians had come to his organization in the past year with concerns about late payment from Arenella, though most attempts to get more timely pay were dropped. 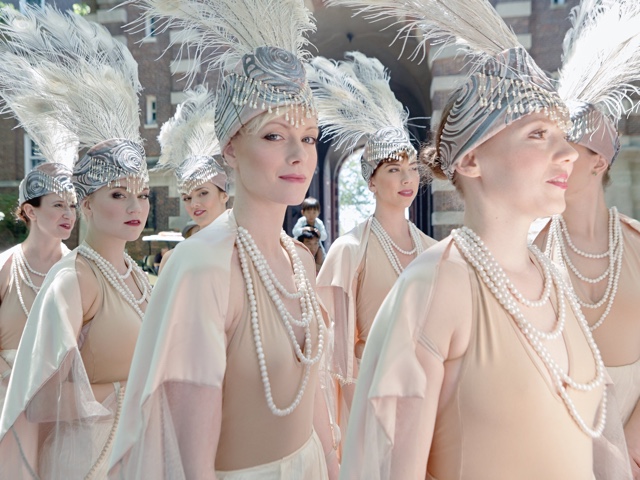 People who worked for Arenella as event producers in the past say he has been several months late in paying them, and other workers, on previous occasions stretching back to 2014.

Jacquelyn Gallo was Arenella's business development manager from 2011 to March 2015, when she says she was fired in the midst of a dispute over payment. She won unemployment insurance that July 2015, according to court documents. A State Department of Labor decision also states that Arenella did not pay Gallo for nine months of work (she says he ultimately paid her for that time).

"It was always chronic late payments, always these heartfelt [excuses]... it's the weather, it's low bar sales, let's just pull up our bootstraps and do it together," Gallo said.

"I was getting into a desperate, destitute situation," she recalled of the months without pay. "It was hard to keep operating. It was like, 'I'm supposed to be managing this huge company and dealing with professionals and I can't even buy lunch or get a cab to a meeting.' It was, 'If you don't grovel you won't get paid.' And I was like, 'Why do I need to grovel to get paid?'"

February 2015 emails between Arenella and the producers also indicate that Arenella was in financial trouble following the December 2014 Winter Ball, an event producers said lost money. "I am making myself sick with stress, my phone ringing off the hook constantly with people looking for their money," Arenella wrote in one email, adding, "I am in no way diminishing my responsibility for the hole the company is in financially."

Producers also said that Arenella has relied on future event ticket sales to pay off frustrated workers multiple times. "I know this is a tough time for us all, and I hope we can stick together these next, short, 2 weeks to get JALP sales rolling," Arenella wrote in the same February email.

Arenella made a similar request last month, telling workers that revenue from the upcoming Jazz Age Lawn Party Miami, which is schedule for January 2017, will go to paying down his debts. "Every effort of our work in putting together future events such as JALP Miami is a way to continue to keep revenue coming in—this is how we are working toward being able to pay you," he wrote in a November 29th email.

Arenella would not comment on specific allegations of money owed or paid late. "Many of the people on your allegations list have also been paid and or the circumstances you listed for some of the non-Jalp events are incorrect," he wrote in an email to Gothamist, adding, "I will not go into further detail, and our communication with them remains open." He declined to comment further. 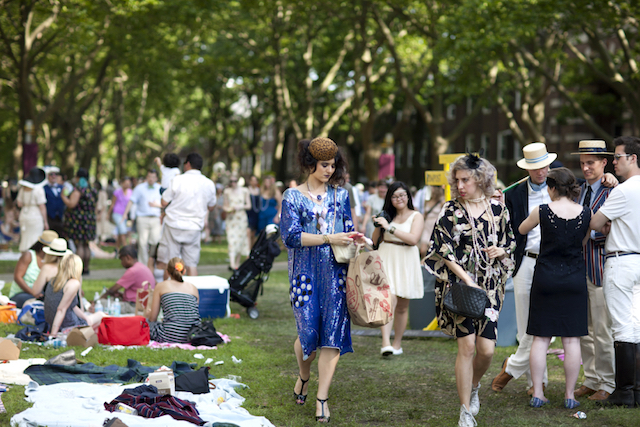 Many workers spoke about their issues with payment in the context of Arenella's apparently lavish lifestyle: his custom shoes and tailored suits, and his collection of vintage cars (seven, according to a 2012 NY Times profile). A more recent NY Times profile refers to his two homes—the Red Hook apartment and the Pennsylvania cabin—which several people mentioned.

"He could sell a vintage car and pay everyone," speculated one long-time worker awaiting payment for August work. "So that's the part that's annoying."

"Any interpretation of my personal spending or private life by any person who has worked on the event or in my company is their own uninformed assumption that holds no truth to the reality of the company," Arenella said.

Jesse Gelber, a pianist and one half of the vaudeville group Gelber & Manning, defended Arenella in an interview with us this week. Gelber said he has worked for Arenella at the lawn party and other gigs for more than a decade. While he declined to comment on whether Arenella had ever failed to pay him, or paid him late, Gelber said their relationship has been "over the long term quite fruitful."

"He's done a lot in terms of making this scene," Gelber said. "I mean honestly, he's more important in creating the 1920s vintage scene than just about anyone."

Cathleen Parra, who was hired to do crowd control at the August event, says she was paid on December 8th—more than 14 weeks after the initial payment deadline. "Last week I sent a payment demand letter that stated that if I didn't get paid in five business days I'd be taking them to small claims court," Parra said.

Another long-time lawn party staffer, yet to be paid, said he's had to borrow money from his sister and a few close friends.

"The only way I would work with Michael again is if I had an ironclad contract and if he handed me a check when I arrived for work," he said. "'Oh, I'll pay in two weeks'? No way."

#Jazz Age Lawn Party
#Late payment
#Michael Arenella
#non-payment
#original
Do you know the scoop? Comment below or Send us a Tip