A construction worker who helped set up the ill-fated Halloween rave at NuHart Plastics Factory—a Greenpoint warehouse partially designated as a Superfund site—claims he developed a rash on his chest, arms and legs while helping prepare the party space. According to a tipster who identified himself as the worker's "associate," he believes that his skin was exposed to asbestos on the site. Here is the tip we received, in full:

An associate of mine worked last week at that Plastic warehouse helping to set up for the Cityfox halloween party. He has asbestos poisoning on his chest, arms and legs currently. Here's a photo of him last night.

I think it was a good decision for the city to shut down this party, even though they usually do throw good events.

Please use this photo if you can to show the dangers of parties in some of these spaces people go to. Because if 6000 people had this on their body today because they were at that party.

The non-union worker not only asked to remain anonymous but he also refused to speak with us directly because he feared jeopardizing future gigs with CityFox, the Zurich-based electronic music label that planned the event. But he did provide, through his friend, a picture of his rash allegedly taken on Monday night.

He has not yet seen a doctor about the rash, which developed after a full day of work inside the factory, but says he recognizes asbestos from working in the construction industry. According to the EPA, asbestos exposure can cause a rash similar to that caused by fiberglass.

The worker was called in to do contracted general labor, his friend told us on Tuesday. "They were setting up inside the building and that's where they were encountering this stuff. There was asbestos everywhere."

In a public apology posted to Facebook on Tuesday, CityFox denied any allegations that they had been aware of the building's "history," and that the site owners failed to inform them of any hazards. CityFox's architect allegedly checked Department of Buildings records for the address, which only list violations related to elevators and boilers.

"CityFox clearly did not do a minimum of research which would have quickly revealed a well documented history of environmental contamination at this toxic hot spot," said community activist Mike Schade, a member of the board of directors for local environmental advocacy organization Neighbors Allied for Good Growth (NAG).

Ready for Halloween this weekend? In addition to an incredible lineup playing on crystalline sound, we can't wait for Projektil to unveil some new projection mapping visuals to complement the ride. Tickets will sell out, get them while you can: bit.ly/CityfoxHalloween Photo by Christopher Soltis

Michael Roux, an environmental consultant hired by site owner Dupont Street Developers LLC, told us on Tuesday that, "We understand that there was a permit issued, but we were not a part of the permit [process]."

Asked how CityFox reached an agreement with site owners in the first place Roux said that "[CityFox] didn't break in. The owners of the site had an agreement with them, but the scope of the event was not understood by DuPont Street Developers."

The CityFox Halloween Experience was shut down shortly before midnight on Saturday when the fire department discovered "flammable chemicals" stacked behind "flammable curtains" on the site, which was also ticketed well over capacity, according to a spokesman for the Department of Buildings. (CityFox has since described the curtains in question as "non-flammable.")

Roux said on Tuesday that he was aware of asbestos remediation work conducted at the factory site this spring. However, he said it predated his time on the job, and that he could not confirm how and when the remediation was conducted, and to what effect.

"There was asbestos cleanup done at the site, prior to my involvement, earlier this spring," he said.

According to DEP record, asbestos remediation was approved for 93 DuPont Street, another address within the warehouse block, between May 29th and September 28th of this year. It was conducted by Olympus Corp., a Jackson Heights-based abatement contractor. 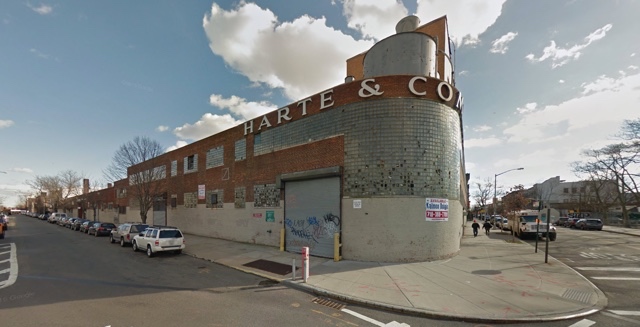 Peter DeFur of Environmental Stewardship Concepts, an environmental consulting firm hired through a state grant to advise the Greenpoint community on the NuHart sight, released a formal update on cleanup efforts
The Department of Environmental Protection did not immediately answer our questions about recent cleanup at the site, specifically whether abatement was conducted throughout the building.

"I would recommend absolutely that they [the construction worker] speak to their doctor," Roux said.

UPDATE: Aaron Simon of the Brooklyn Memory Project documented a community meeting on Monday night, where Roux and Yi Han, one of the site's co-developers, fielded questions about asbestos remediation on the site. That portion of the meeting is excerpted below.

Han says that, to her knowledge, there is asbestos in the roof, but that the workers did not come close to it.

"When we talked about asbestos to the organizers of the events, we didn't know what was contained asbestos or not," Roux adds. "It's the difference between presence and risk.... So yeah, there may be asbestos in the building, we don't know. If it's contained... it doesn't pose a risk."