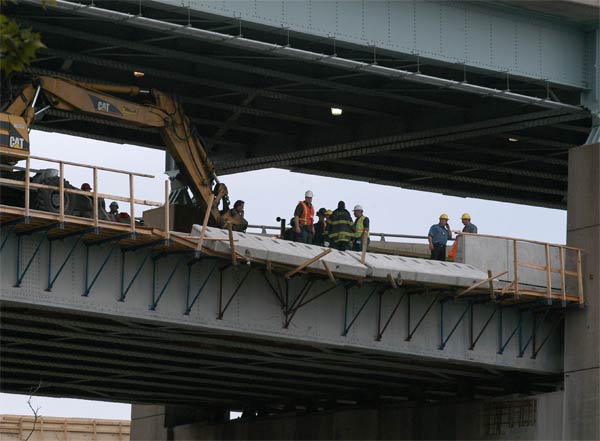 Yesterday afternoon, a worker took a fatal fall from the Verrazano-Narrows Bridge. Manuel Pereira, 48, had been working on a catwalk next to the lower level of the bridge; the Staten Island Advance reports the concrete barrier "apparently...tipped over" onto the catwalk.

An excavator vehicle was placing "Jersey barriers" -- 8,500-pound, 10-foot-long concrete slabs that separate traffic from a construction area -- along the bridge at the time.

Pereira was helping with the placement.

It appeared that the excavator may have knocked two barriers over onto the platform, apparently pushing Pereira through the catwalk's railing, sending him tumbling down onto a public greenway that had been appropriated for the construction staging area.

Pereira fell on the Brooklyn side, in John J. Carty Park. It's not clear whether he was wearing a harness. A co-worker, John Simoes, lamented to the Post, "Everybody loved working with him. He's one of the best guys in the company...He'd give you the shirt off his back."

Authorities are investigating the death. The MTA, which oversees the bridge, had started a $58.8 million project to replace the Verrazano's decks in June, and Pereira's employer, El Sol, was hired as a sub-contractor. The project was to last 21 months, but El Sol "was offered a $6.2 million incentive package to speed up the project from 21 months to 15 months," because of complaints about the traffic, according to the Advance.

Pereira lived on Sullivan Street with his wife and son. El Sol had no comment.