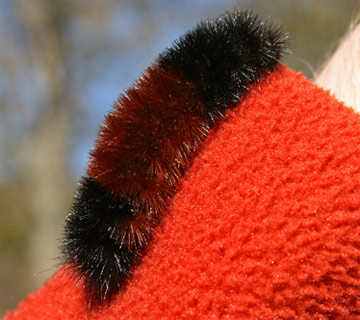 There's plenty of cold air behind the front that passed through the city last night. For now the axis of cold has plunged southward rather than heading east. That misdirection will let the city squeeze in one more warmish day today. Expect a high near 60 with a slight chance of showers later this afternoon.

The warmth will be gone tomorrow as a low pressure system traveling along the front will bring steady rain overnight and yank the cooler air eastward tomorrow. Highs Tuesday and Wednesday will be around 50, with a good chance of rain tomorrow and a slight chance the day after. Temperatures should start rebounding later in the week and the weather currently looks delightful for trick-or-treating on Friday.

We were away last week rescuing woolly bear caterpillars, including the critter pictured, as they tried to cross our nation's highways. The woolly bear, or woolly worm, caterpillar is the larval stage of the Isabella Tiger Moth. It is claimed that the stripes of the hairy little beast can accurately forecast the upcoming winter. Our copy of Weather Proverbs puts the prediction as "The wider the brown band on the woolly caterpillar, the milder the winter".

Woolly bears are one of the few caterpillars that overwinter as a caterpillar, instead of wrapping itself up in a comfy cocoon (they've got a bit of anti-freeze in their blood). The closest woolly bear prediction we could find called for a mild winter upstate in Middletown. Though we should say the reporter showed an alarming level of mathematical illiteracy. A caterpillar in Norwich, Connecticut is in agreement, predicting a "short and warmer-than-usual winter".

The sad truth is caterpillars can't predict the weather. Their relative lengths of their stripes are due to genetic variations. A female tiger moth lays hundreds of eggs at a time and the lengths of brown and black stripes may vary greatly within a single brood. Nonetheless, the little crawlers are cute and there are many woolly bear festivals around the country, the oldest and most famous of which, and the only one Gothamist has been to, is Cleveland TV meteorologist Dick Goddard's brainchild, the Woollybear Festival in Vermilion, Ohio.
Photo of the woolly bear caterpillar by Joe Schumacher

#cold
#rain
#weather
#woolly bear caterpillar
Do you know the scoop? Comment below or Send us a Tip