Woody Allen Speaks Out Against These Unacceptable, Ungraceful Bike Lanes

Upper East Side residents gathered at a church on East 88th Street last night to argue about a revised DOT proposal to paint new bike lanes on one-way streets throughout the neighborhood. Derisive jeers and earnest applause erupted repeatedly throughout the heated meeting inside Holy Trinity Episcopal Church, as cyclists clashed with older residents who deem bike lanes unsafe and unwanted in their neighborhood.

Among them was director, writer, and actor Woody Allen, who has a home on East 70th Street. Allen, who has never had much love for cyclists in NYC, told us the plans were "unacceptable."

"None of the streets can accommodate a bike lane in a graceful way," Allen said, arguing that the DOT's plan to add bike lanes to Upper East Side crosstown streets is out of step with the community. "Every street has a good argument why it shouldn't have a lane."

In early March, the DOT presented UES residents with plans to add bike lanes to 85th and 84th Streets, 78th and 77th Streets, and 67th and 68th Streets—routes that would connect Central Park to the East River Esplanade. That meeting did not go well, and residents demanded alternatives before the CB 8 transportation committee voted on the matter. Last night, a DOT presentation led by DOT Manhattan Borough Commissioner Margaret Forgione named East 70th and 71st streets, East 75th and 76th Streets, and East 81st and 82nd Streets as possible alternatives for the earlier proposal.

Many residents would hear none of it.

Peter Adelaar, 65, demanded that all New York City bikers be required to obtain licenses and carry insurance. "The elderly people, they are scared to death of coming near these things," he said. The 78th Street resident characterized bike lane supporters as Upper East Side interlopers. "They're not from here," Adelaar said. "They're in their 20s and 30s, they just want their exercise." 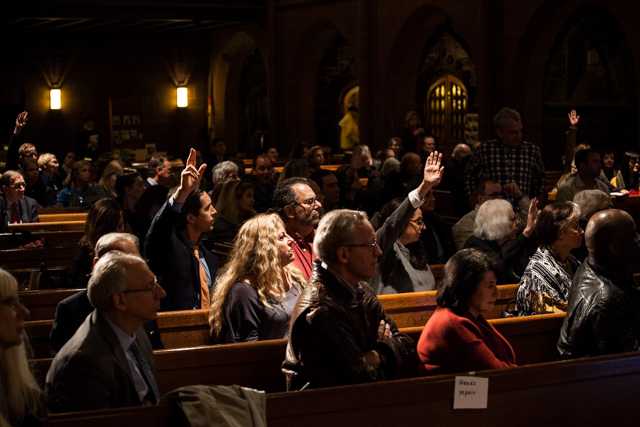 "No one gave this city the right to inundate us with bikes," said Allan, another UES resident, who withheld his last name. "This city wants to get rid of all drivers." Allan criticized the de Blasio administration and suggested that the loss of parking space in favor of biking initiatives, including local Citibike racks, was "all politics." (The DOT says that each of the proposed bike lanes would have no impact on current parking levels.)

Double-parked delivery trucks, school buses, ambulances, school crossing guards, and illegal parking by Fox 5 employees on 67th Street were all cited as reasons not to paint bike lanes on streets proposed by the DOT. Many locals were careful to voice their support of biking and acknowledged the need for bike infrastructure on the UES, but rejected any plan to add lanes to their own specific streets. 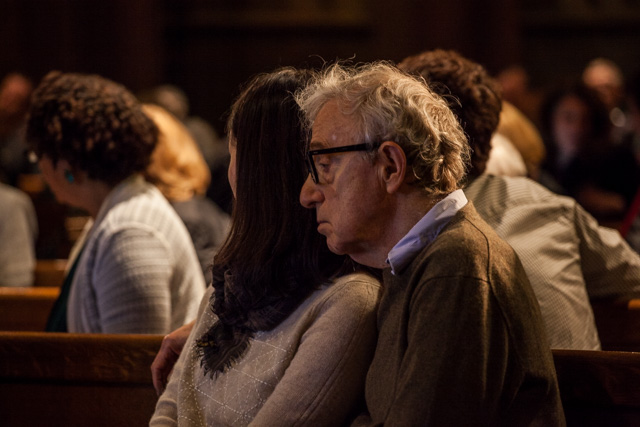 Megan Irwin, 35, told the board that she was concerned for her three children, who attend schools on East 84th Street. Irwin said cyclists would put residents at risk, "especially our most precious lives."

70th Street resident and cyclist Richard Adler voiced his support for the DOT's plans. “I feel there’s a lot of NIMBY going on here," Adler said. "People seem to fear something that’s unfounded."

Currently, the only marked crosstown bike lanes on the Upper East Side are on 90th and 91st streets. Yet the neighborhood is experiencing considerable delivery and commuter cyclist traffic. According to NYPD crash data, last year saw a total of 34 injuries or fatalities on 85th, 84th, 78th, 77th, 67th, and 68th streets, four involving cyclists struck by cars. (None were cyclist-pedestrian collisions.) All of these factors prompted CB 8 to request new lanes from the DOT late last year.

Community Board member Craig Lader voiced his support for two of the original DOT lane proposals and one of the new options. "These bike lanes, once they're there, no one really tends to even notice them...People are still going to bike on them. It's not like there are new biking regulations that are going to replace cars." 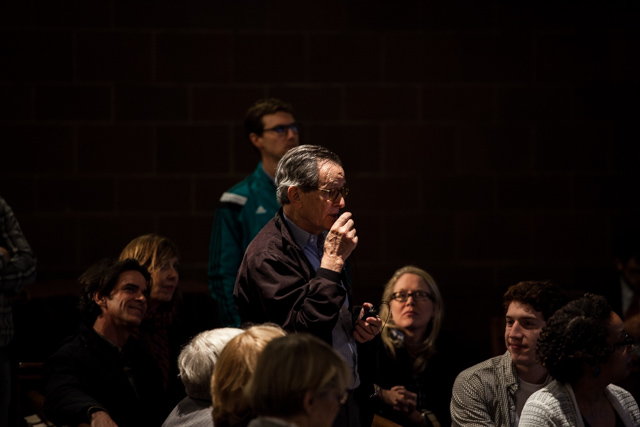 "Organizing the roadway for all increases the predictability for everybody. And a predictable roadway is a safer roadway for everybody," Board member and Bike NYC Planning Manager Sharon Pope said, before voting to approve the DOT plans. "It is true that bike lanes calm traffic."

"The statement by the DOT that at this time they are not willing to have any licensing of bicycles is making a statement that they are willing to build an infrastructure with the aim of encouraging cycling in the city, but there is no plan in the distant horizon for real enforcement," Board member Michele Birnbaum said. Birnbaum criticized both the original bike lane plan and its new supplement.

"The only way to get accountability, reliability, and liability of cyclists is licensing," said Birnbaum. "I will not support anything that expands the infrastructure of cyclists, because the concept is 'If you build it, they will come.'"

Nevertheless, the committee voted 9-2 to send the bike lane proposal to the full Community Board for approval. The full board, whose final decision the DOT is not technically required to obey, will vote May 18th.

#Bike Commute
#bike lanes
#bike nyc
#citi bike
#Community Board 8
#cyclists
#upper east side
#woody allen
#original
Do you know the scoop? Comment below or Send us a Tip