On Tuesday the NYPD arrested 31-year-old Paul Kraft, the man they believe to be the "Gentleman Groper" responsible for sexually assaulting at least five women in Manhattan earlier this year. Now a woman who knew Kraft tells us that her and her friends thought they recognized him in the initial photos the NYPD released this summer, but declined to contact the authorities after the arrest of the first suspect Karl Vanderwoude. "Paul's girlfriend even teased him about looking like the guy in the photos, and he kind of freaked out. He got his eyebrows waxed and changed his hair color—his eyebrows were a lot thinner afterwards." 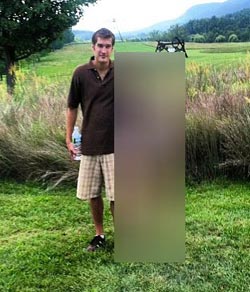 The woman, a scientist who would only speak to us on condition of anonymity, dated a colleague of Kraft's girlfriend at book publishing company W.W. Norton. She said that around a year ago, the four of them had dinner on two separate occasions, one of them at Hill Country BBQ in Flatiron.

"Initially he seemed like a really cool guy, because he would sit around and talk to the girls, but then you kind of realized that he didn't engage the guys in any conversation," the woman said, noting that Kraft was a lawyer that had trouble finding permanent employment and worked several temp jobs. "His overall demeanor was just kind of creepy. He showed a kind of insecurity—my boyfriend and I would talk about it all the time because his fiancee was so sweet."

The woman's ex-boyfriend said that Kraft's girlfriend (who no longer works for Norton) confided in him that she had found violent pornography—"rape porn"—on Kraft's computer and confronted him about it. "It bothered her and she told him so, but they didn't break up from it." In fact, Kraft and his girlfriend recently got engaged—pictures of Kraft show up on his fiancee's Twitter feed as recently as November 22.

The woman said that after Vanderwoude was dismissed as a suspect, mutual friends of Kraft came forward to authorities "because they saw him wearing the same coat, jeans, shoes, everything that he was wearing in the photos." Additionally, the source and her friends suspected it was Kraft because he worked at a temp job downtown near one of the incidents.

Kraft's fiancee and her colleague (our source's ex-boyfriend) have not responded to multiple requests for comment. An email to Kraft's fiancee notes that she is out of the office. According to the criminal complaint filed by the Manhattan DA's office, Kraft has been charged with five counts of forcible touching, five counts of third degree sexual abuse, and one count of second degree unlawful surveillance. He is currently free on $5,000 bond.

#gentleman groper
#Karl Vanderwoude
#paul kraft
#sexual assault
#original
Do you know the scoop? Comment below or Send us a Tip
A new Gothamist is coming! We’ve moved comments over to our beta site. Click here to join the conversation and get a preview of our new website.