An MTA track worker scared off a man who was raping a 36-year-old woman on the tracks at the Bowery J subway station at Delancey Street on Wednesday. Police say the suspect targeted the woman who got off a train around 1 a.m.: The [victim] was on an escalator when 29-year-old Michael Torres grabbed her around the neck, covered her mouth and told her not to scream. He then dragged her to the end of the platform, threw her on the tracks and sexually assaulted her." 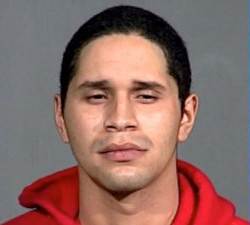 , “He throws her on the tracks, drags her into the tunnel, beats, rapes and sodomizes her." A track worker who was walking along the tracks was holding a light, which the victim noticed so she reportedly starting screaming. The track worker ran over— prompting the suspect to flee— helped the woman and called 911.

Police found surveillance footage of the suspect leaving the station—his "entire run from the attack was caught on various cameras"—and found that he entered a men's shelter at 197 Bowery. Police arrested Torres, charging him with assault, rape, reckless endangerment, criminal possession of a weapon and criminal sex acts. The News says that he has "27 prior arrests dating back to 1996, mostly for assault and drugs"