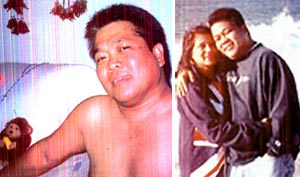 Reverend Elvis Elano, a priest formerly posted at Our Lady of the Snows in the Queens, is having a very trying day. After his secret seven-month affair with parishioner Judith Rodrigues-Lytwyn ended earlier this month, his ex has gone public with a lawsuit in Brooklyn Supreme Court, and The Smoking Gun has obtained a cachet of embarrassing photos, emails and documents, like the receipt for his online Viagra purchase.

Rodrigues-Lytwyn, age 50, says in a court statement that, "I was looking for some spiritual guidance, and finding some peace from a religious perspective." Instead, she contends that Reverend Elano abused his position and seduced her as she went through a traumatic divorce. She was in the confession booth last March when he allegedly told her, "Your presence struck me like a thunder bolt." Later, he assured her their relationship was "ordained by God."

Their affair ended when Rodrigues-Lytwyn got her "head on straight" and "realized that he preyed upon me." Another factor in the break-up, apparently, was Elano's confession that he picked up a painful rash on his genitals from another woman. In an email to Rodrigues-Lytwyn (now on The Smoking Gun), Elano writes,"The other Friday, I tried to look for a doctor who does not know me. It is because of the rash on my thing. It is spreading out. Now I even have on my legs. They are like spots but painful. I don't know what it is..." Rodrigues-Lytwyn is seeking $25 million from the Diocese of Brooklyn, which governs Our Lady of the Snows.

#affair
#brooklyn
#church
#Elvis Elano
#lawsuit
#post
#priest
Do you know the scoop? Comment below or Send us a Tip