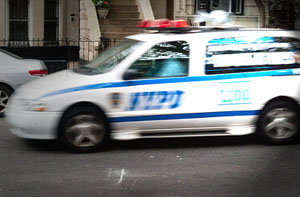 Annette Mateo appears to have been one toke over the line last night when she allegedly carjacked an NYPD van and took it for a joyride that almost immediately became devoid of joy. According to the Post, Mateo had gone to file an unspecified complaint at a police station in Harlem and became frustrated with the lackadaisical response from officers there. Storming out of the building at 9:40 p.m., she came upon two rookie cops switching seats in their police van. She then did what any sensible, tweaked out citizen would have done: she sent a message to the Man by stealing his ride (allegedly).

One of the officers tried to stop her from jumping behind the wheel and sustained an injury to the elbow for his troubles. The Daily News says that Mateo made it less than a block before crashing into an 18-wheel Pathmark tractor-trailer and a parked Mercedes-Benz on Broadway near W. 152nd St. Mateo was taken to Harlem Hospital, where she’s in serious condition and faces charges of driving under the influence of drugs, grand larceny auto, and breathtaking stupidity.

As it turns out, the totaled Mercedes belongs to hip-hop recording artist Emperor Chi, who now has an interesting anecdote to rap about: “I saw the yellow tape, and I thought to myself, 'Wow, somebody must have gotten shot.' I was actually just hoping that the cops would let me get to my car," he told the Daily News. "I turned the corner and noticed that my car was totaled. I said to myself, 'This can't be happening. This is like out of a movie.'" Because only Hollywood could dream up a scenario in which a rapper's car gets wrecked.