Yesterday morning, a woman survived after falling into the subway tracks and having a train run over her at the 49th Street N/Q/R subway station in Manhattan. But now it turns out that not one but three different trains ran over her!

Police believe the 22-year-old woman was intoxicated when she fell onto the northbound tracks around 6 a.m. The Post, which identifies the victim as Mary Downey, reports that she "toppled over" into the tracks as one train was approaching:

Unable to lift herself off the rails, Downey apparently managed to position herself between the rails as at least one of the trains barreled over her, police sources said. At one point, it appeared she may have been able to roll to the scant space between the platform and the tracks, sources said...

After the first train passed over her, Downey continued to lie helplessly on the track bed of the empty station as yet another train operator unknowingly drove over her, too, according to police, who said she was conscious through much of the terrifying ordeal.

Downey wasn’t discovered until the third train’s operator spotted what he thought was a piece of trash on the tracks. It was actually Downey’s hand waving for help, sources said. 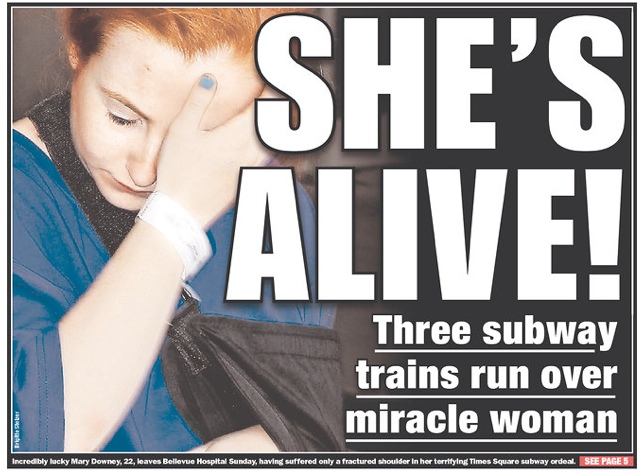 FDNY Battalion Chief Mike Meyers told the Post, "She was lucky enough to have, it looks like to us, rolled to the platform and was in between the platform and the train when the train came into the station." Downey, an Irish immigrant living in Queens, was taken to Bellevue Hospital, where she was treated for a fractured shoulder.