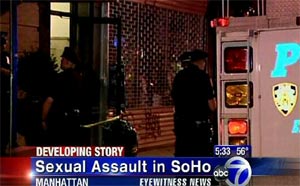 Early this morning, a woman was attacked in the courtyard of her apartment building on Prince Street at Sullivan. Police say the suspect may have followed her from the subway.

The incident took place around 3:30 a.m.; according to police, the 19-year-old victim was sexually assaulted after the suspect threatened her with a box cutter. After he fled, police dispatched the K-9 and aviation units to search for the attacker, who is described as, per WABC 7, "a black man, with a stocky build, wearing a short sleeve jersey, jeans and a blue baseball cap." He also has "distinctive" pock marks on his face.

Another woman was sexually assaulted at her Sullivan Street apartment building last month. According to First Precinct crime statistics (PDF), there have been 6 rapes so far this year--compared with 3 during the same period in 2007 (there were a total of 7 rapes in 2007). And in March, a man was arrested after he followed a woman from a subway station into an East Harlem building and raped her in the elevator.