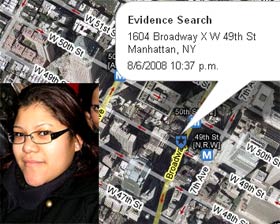 Looks like trouble is following Lil' Kim into her 33rd year, or at least the headlines are: A 24-year-old woman, Ingrid Rivera, was found dead last night in a rooftop utility closet of midtown club Spotlight Live, where she attended the rapper's birthday party on Sunday.

It is believed she was "beaten with a blunt object — possibly a champagne bottle — and left for dead."The NY Post reports that Rivera, a JFK ticket agent, was thrown out of the party for being too drunk, something the Daily News elaborates on, saying she "got into a fight with a club manager after he found her drunk in the men's bathroom." Once kicked out Rivera was left alone, her friend Sasha Castillo (who claims she tried to follow her) stayed in the club.

Rivera's mother questions the bouncer's actions, asking why they didn't send her to the hospital instead of kicking her to the curb. They are now suspects, with even Spotlight's "VIP Host" saying: "It wouldn't surprise me if it was the bouncers. A lot of the bouncers, if you give them a hard time, they get really tough and rowdy. They're tough guys. You don't want to mess with them. That's actually a problem at the club."

As for Lil' Kim, she may have very well been gone by the time of the incident. Actress LisaRaye McCoy-Misick told the Times: “When I was there, everything was cool. But we didn’t stay very long. Celebrities never do." Rivera's mother says that her daughter was "wearing a blue dress and silver and blue heels. She was very excited about the rap lady." Early this morning investigators were seen leaving the club with a box labeled "evidence." Earlier this year the club made headlines when a fight spilled out onto the street and one man was killed.

UPDATE:The Daily News is reporting that "Sayed Rahman, a barback at the Spotlight Live club" has confessed to the murder, saying he targeted Rivera because she was visibly drunk when he spotted her on the street. "Promising that he could get her back into the hotspot, he lured her to the roof...possibly trying to rape or rob her. Rahman then hit her in the back of the head and jammed her lifeless body in a rooftop electrical room." Reportedly Rivera had also attempted to give Lil' Kim flowers just before she was killed.