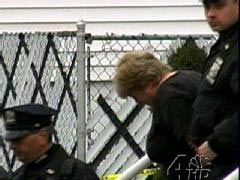 Barbara Sheehan, the woman who fatally shot her NYPD sergeant husband in February, has given an interview to the Daily News, explaining her actions.

Retired cop Raymond Sheehan had been shaving in their Howard Beach home when his wife allegedly shot him in the back with 11 rounds, using one of his guns. Her lawyer said Raymond Sheehan was the real "aggressor," and friends and family members said that she had been repeatedly abused (one neighbor even clapped for Barbara Sheehan, when she was taken in by police).

Now, out on $1 million bail, she tells the News, "I think he probably would have killed me... he was just totally out of control by then." Sheehan said the day before she killed her husband, he punched her because she didn't want to go to Florida with him (apparently he attacked her on a previous trip). He took her to the hospital, but called her from the car while she was in triage, "He said he had bullets in his pockets, two guns on him and if a police car pulled up, he'd know I told them, and he would find my father and my daughter and go down in glory." So she left without getting treated.

Sheehan said her husband's threats scared her from going to the authorities, "He told me the police would never believe me. When I tried to call 911, he'd grab the phone and beat me with it. He said an order of protection is a piece of paper and paper doesn't stop bullets." A grand jury is currently deciding whether murder charges are warranted against her.