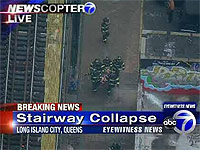 Yesterday afternoon around 5:15 p.m., a woman was walking down an external stairway at the artists' warehouse workspace Five Pointz when the stairway collapsed, trapping her under the rubble.

The Daily News reports the victim is Nicole Gagne, 37, a jewelry designer, who has a work loft at the Long Island City structure that is familiar to passengers on the 7 train—the warehouse on Davis Street is covered in legal graffiti. Apparently a 20-foot section of the 100-foot concrete stairway fell—and Gagne fell 100 feet. An artist told the News, "It was a huge noise. I thought it was a bomb. The cement blocks covered her. You could only see her small feet sticking out."

According to NY1, the Department of Building is now inspecting the building and questions whether it's safe: "Artists say they were told the building is unsafe and it was being shut down temporarily due to serious safety code violations." Naturally the artists are worried; one told NY1, "Over five years you accumulate a lot of work. I work every day. So I'm trying to figure out how to get my stuff out." NY1 adds, "City officials told the artists on Friday that they could only reenter once the building had a protective scaffolding, and that it would not be built until at least Monday."