Woman Hit by Tour Bus at Bowery and Broome 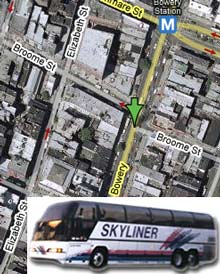 A tour trying to turn left onto Broome Street from Bowery struck a 76-year-old woman yesterday morning. The bus, operated by Skyliner, was on its way to Atlantic City.

The woman had been walking south on Bowery with her son when the bus hit her. Witnesses said the woman was hit hard by the bus, flying 15 feet. One witness told the Daily News, "I guess she wasn't paying attention." Maybe - but buses (one report says it was a double-decker bus) do have blind spots.

The woman is in critical condition at Bellevue Hospital. The driver was not charged and remained at the scene; the Post reports the bus's driver got out to help the woman and others "gave up their jackets to use as a pillow."