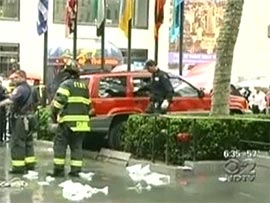 A pregnant woman driving an SUV in Midtown went into labor and drove the car into a crowd at Rockefeller Center, near West 49th Street, yesterday afternoon around 2:30 p.m. Most of the crowd managed to get out of the way, but at least one pedestrian was hit (some reports say four were injured) and the guard rail was damaged.

Apparently the woman told police she "became dizzy and disoriented" on her way to pick up her husband. She had a young daughter in the back of the car--the Post has a picture of the girl crying. The pregnant woman was taken to NY Presbyterian Hospital, but her husband did not comment on her or the baby's condition.

A witness told 1010 WINS if there weren't guardrail there to stop the SUV, "it definitely would have gone over the fountain." Police are not planning file charges against the driver. Recently, a van jumped a curb in a Harlem and hit a number of pedestrians.

#jumped curbed
#midtown manhattan
#pedesterian struck
#pregnant woman
#Rockfeller Center
Do you know the scoop? Comment below or Send us a Tip