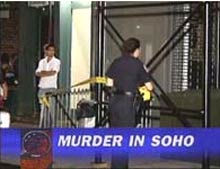 Police are investigating the death of a woman found in her apartment. A roommate of the 36-year-old woman found her alone in the Crosby Street (at Grand) apartment - with two stab wounds. The roommate had been away over the Labor Day weekend and apparently neighbors had noticed a smell.

WABC 7 reports, "No one in the neighborhood seems to know the victim who was reportedly staying with an ex-boyfriend after having issues with a more recent boyfriend." Plus, police also say that there were no signs of forced entry.

The Post reports that the boyfriend is suspected: "The boyfriend had been arrested several weeks earlier for allegedly stabbing the woman in the neck with a samurai sword, claiming she had given him AIDS. " The victim's boyfriend was released from jail in early August because the Manhattan DA's office could not get an indictment. Newsday reports that the prosecutors weren't able to get the victim to come in and testify.

And Newsday adds that roommate found a previous roommate dead from a drug overdose in the apartment last June.

#aids
#And Newsday
#crime
#crosby street
#death
#labor
#labor day
#manhattan
#manhattan da
#police
#smell
#the post
#wabc
Do you know the scoop? Comment below or Send us a Tip