A 26-year-old woman died after falling from a fire escape outside her upper Manhattan apartment building. Police say that she had been drinking at the time. 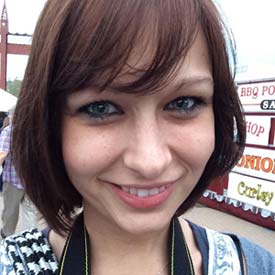 Kasey Jones was on a rooftop on a Vermilyea Avenue building in Inwood early this morning. According to WABC 7, "Around at 2:20 a.m., she was climbing down the fire escape to check on a friend in her apartment when she apparently lost her grip. The woman fell to her death in the rear of the building."

The NY Post spoke to a neighbor, Sangelys Perez, who said, "I heard people running on top of the roof. Her roommate opened my window. She was crying. She said 'I’m sorry, I’m sorry.' ... I asked her ‘are you ok?’ She looked down and said ‘she fell she fell.’ I was scared I didnt know what to do or say."

Jones apparently fell five stories. DNAinfo notes that Jones had posted Instagram photographs of herself on the rooftop; a friend commented, "It scares the bejesus outta me whenever you post these 'casually leaning over the edge' pics," and she replied, "well I have a lot of whiskey to help me out."

The climb down from the fire escape though. #imsotall #iloveit

#fatal fall
#fire escape
#inwood
#Kasey Jones
Do you know the scoop? Comment below or Send us a Tip