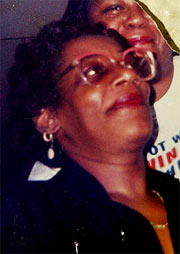 As mentioned in Extra, Extra yesterday, 54-year-old Eunice Washington was killed when a livery cab driver ran over her - and it may have been on purpose. WCBS 2 had initially reported that the driver may have argued with Washington's 29-year-old daughter Santana over the fare, but now it turns out that the argument was more about the driver's rudeness.

Washington, her daughter, and her son got into a burgundy livery cab in the Cypress Hills section of Brooklyn around 4AM yesterday morning. The Daily News reports that the trio decided to take the cab because it would have been an hour wait for the bus. The cab's "driver told [Santana] to come up front and said he'd pay her when they got to his house" - as in, the driver was implying Santana was a prostitute. This angered the family, so they started to yell at him after getting out of the car. The driver then put his car into reverse, jumping the curb, and struck Washington.

Washington was dragged by the cab for many feet; she was pronounced dead at Brookdale University Hospital. She had worked as a cafeteria worker in the NYC public school system. Police are looking for the driver.